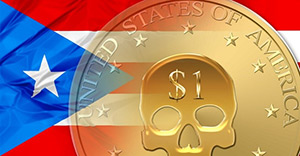 At 4 p.m. ET this afternoon, U.S. President Barack Obama will reveal the eight individuals he's tasked with serving on his Puerto Rico oversight board. These folks will be charged with restructuring the commonwealth's massive $70 billion debt burden.

To be clear: This board is not tasked with doling out another bailout placed at the feet of American taxpayers. It's more like a bankruptcy -- they'll oversee the renegotiation and restructuring of Puerto Rico's debt with lenders.

Seven of the eight Puerto Rico oversight board member appointees' names were leaked to Bloomberg this morning. One still remains anonymous till that 4 p.m. press conference.

Quick reminder: This committee was formed as part of the recent PROMESA Act the president signed into effect on June 30. PROMESA was a bipartisan compromise with the Republican House and Senate. Both chambers approved the bill by a large margin before handing it over to the POTUS.

The legislation prevents bondholders from suing the island territory until February 2017.

It also made President Obama's Puerto Rico oversight board possible. The eight members that have been selected by the POTUS came from a list given to him by Republican leaders in Congress.

Now here's a look at exactly who are the Puerto Rico oversight board members we know about so far...

LIST: Who Are the Puerto Rico Oversight Board Members?

As far as what this group of fiscally intelligent individuals will tackle first goes, it's expected that they'll take on Puerto Rico's retirement system - because it's running out of cash. Its largest plan, the Employees' Retirement System, is set to deplete its assets in the fiscal year that begins July 1, 2017, according to Puerto Rico's latest audit.

And of the $30.2 billion the plan promised to current and future retirees, it only has 0.27% of the assets needed to cover those payments. The total unfunded liability for the island's three retirement plans is about $43 billion.

U.S. retirees stateside could easily be affected by the Puerto Rico debt crisis as well. Here's how...

Your Stake in the Puerto Rico Debt Crisis

You see, many pension and retirement funds here in the United States have loaded up on Puerto Rico bonds over the past decade. Many have done so without even knowing it via financial advisor-recommended investment bundles.

After all, these bonds were a tempting buy. They offered higher than average yields and triple-exemption status - meaning the income from the bonds is exempt from federal, state, and local taxes. And as government bonds, they were assumed to be safe.

But as the Puerto Rico debt crisis now unfolds, investors need to take a look at where they might be exposed to this risky debt...