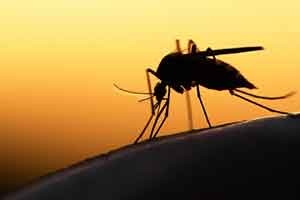 First reported in Brazil in July 2015, the mosquito-borne Zika virus has now spread to the United States.

While 2,687 of U.S. Zika cases are travel-associated, as of Aug. 31, 35 locally acquired cases were reported in Florida, according to the Centers for Disease Control and Prevention. That means these cases were non-travel-related, resulting from mosquitoes native to Florida. So far, these have been the first and only locally contracted Zika cases in the United States.

The outbreak has forced the CDC to issue a historic travel warning for Miami, Fla., warning pregnant women and their partners not to travel to some areas of the city. This is the first time the CDC has ever warned people not to travel to an American neighborhood for fear of catching an infectious disease, according to agency spokesman Tom Skinner on Aug. 3.

Related: Here's how you know if you have Zika 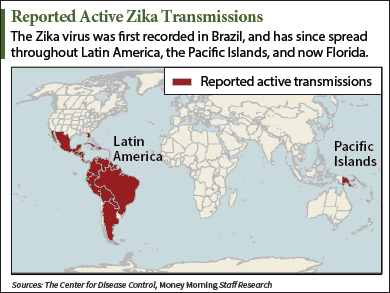 Meanwhile, the CDC is urging Florida officials to act quickly — hot, humid climates like the Sunshine State's are ideal breeding grounds for mosquitoes.

Researchers fear Zika-carrying mosquitoes could start appearing in other southern U.S. states for the same reasons. Infected mosquitoes could easily wander up from Latin America to Mexico. From there, they could simply enter contiguous New Mexico or Texas – two other states with hot and occasionally humid climates.

With so many southern states vulnerable to the pernicious virus, which has symptoms ranging from mild fever to scary pregnancy-related conditions, many are asking what's being done to stop the Zika virus spread in the U.S.

Here's what U.S. biotech companies and state and federal governments are doing — or failing to do — to prevent the spread of Zika…

How the U.S. Is Combating the Zika Virus

One of the best ways to eliminate the spread of endemic viruses like Zika are with vaccines.

One of the most promising comes from a small biotech company called Moderna. On Sept. 7, the company announced that it received an $8 million grant from the U.S. government for Zika research. The grant will help the company push its vaccine into the human-testing phase in the next few months. If the vaccine passes its clinical tests, Moderna's government grant could expand to a whopping $125 million, the company said.

Another strategy to fight the Zika virus is somewhat controversial: genetically modified mosquitoes.

In response to the Zika virus spread in Florida, the U.S. Food and Drug Administration approved a plan to release millions of mutant mosquitoes into the state, according to PBS.

The plan, spearheaded by a biotech company called Oxitec, creates a synthetic protein in millions of mosquitoes. The protein kills their offspring before they can become adults. If the wild female mosquitoes mate with modified males, the population dies off quickly.

Oxitec has already released millions of mutant mosquitoes in Brazil, the Cayman Islands, and Panama. The results have been staggering: nearly 90% of the mosquito population has been reduced.

Besides the efforts of biotech companies, our federal government has been trying and failing to do its part…

Zika funding has been Congress' first priority since it came back into session on Sept. 6 from a seven-week summer hiatus. Since May there's been a stalemate over a $1.1 billion package to fund Zika research and preventative measures. Of course, per Congressional dysfunction that's become a mainstay in our legislative process, Dems and Repubs can't seem to find common ground…

Senate democrats keep voting the bill down due to language they say will limit funding for Planned Parenthood; meanwhile, GOP lawmakers refuse to budge. The latest vote for the bill failed on Sept. 7.

The CDC has consistently warned lawmakers that it needs more funding to combat the virus's spread.

"In a public health emergency, speed is critical. A day, a week, a month can make all of the difference," Dr. Tom Frieden, director of the CDC, told the National Press Club in May.

In the meantime, officials from the CDC, the World Health Organization, and the National Institutes of Health are encouraging basic precautions to stop the Zika virus spread. The organizations say those knowingly infected with Zika should abstain from sexual activity for a few months. Besides contact with a Zika-carrying mosquito, sexual contact with a carrier is one of the easiest ways to spread the virus.

Other Zika precautions include wearing long-sleeved shirts and long pants near affected areas. In addition, the organizations advise staying in places with air conditioning and window screens to keep mosquitoes outside.

With Zika infections projected to rise even more in the United States, one biotech company is providing the best solutions to blunt the threat.

Money Morning Executive Editor Bill Patalon identified this company as a classic "pick and shovel play." That means investing in the supplies instead of the actual drugs.