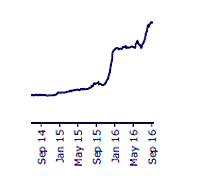 And rates are definitely headed up... as this often-overlooked indicator tells us.