You see, on Thursday, markets looked like they were giving up; the major indexes broke through near-term support, and some important psychological support levels were pierced.

The breaking news was that China's exports had fallen 10%. So industrials, materials, and commodities took the brunt of the selling. China is always a barometer of global growth, because it does lots of the globe's growing. And so with news of China's export fall-off, financials were set to release their earnings amid an "atmosphere of reduced expectations," to put it mildly.

Of course, those expectations have been carefully stage-managed and downplayed all along - there's that psychology again.

Then on Friday, starting with JPMorgan Chase & Co. (NYSE: JPM) before the open, the banks let fly with their earnings, and things got "interesting"...

Robots and Cooperative Analysts Set Up This Profit Play 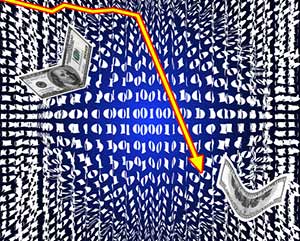 Banks are under stress worldwide, of course, but especially in Europe. Here in the United States, earnings are weak, and so banks have taken it on the chin. Thursday was no exception.

Of course when the volume dried up, the "robots" - high-frequency trading (HFT) computers - took over. The robots were trying to show bids to scare shorts into covering and entice buyers into the game.

It worked, as it usually does. Because that's what runs markets these days in the absence of committed investor moves: robotic, high-frequency trading.

As a matter of fact, nine times out of 10, HFT will reverse whatever sizable, knee-jerk moves that mere human traders precipitate, as they did when that support level was cracked on Thursday.

You see, the 'bots can almost instantly ascertain the best risk/reward moves to make on an extremely short-term basis. I know, because I've designed HFT algorithms, or "algos," as they're called.

So after a soft landing of sorts, courtesy of Thursday's HFT action, the financials' "main event" started on Friday. For entertainment, they didn't disappoint.

Well... at least JPMorgan Chase didn't disappoint. In fact, JPMorgan's "better than expected earnings," which came out well before the open, moved all the financials higher in pre-market trading and boosted the futures substantially higher.

Then Well Fargo & Co.'s (NYSE: WFC) earnings numbers came out, then Citigroup Inc.'s (NYSE: C). They, too, beat analysts' expectations, and the market moved higher, dancing to the rising tide of the financials.

Now, this might represent fundamentally good news if their reports were based on anything resembling reality - fuzzy earnings reporting, analysts who obligingly lower the bar for earnings and revenue expectations, global central bank activity, money market reforms, and even Brexit have given banks a leg up.

The reality is, return on equity (ROE) has fallen for each of the three giants that reported on Friday. Citigroup is the weakest link of the bunch, with its rotten 6.8% ROE this quarter and slippage in the value of assets it's hiding in its bad bank division.