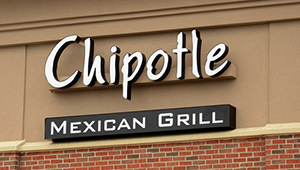 And while some investors may be tempted to buy Chipotle stock on the dip, we advise against buying in...

As the company works to recover from a widespread E. coli outbreak, it has lost focus on its once-stellar customer service. That has caused long lines at its restaurants, which has spoiled one of its former key strengths. It has also affected sales.

Because of the escalating problems, co-CEO Steve Ells said the company is now "nervous" about meeting its previous guidance for next year.

Chipotle's same-store sales, a closely watched metric, plunged 21.9% last quarter. That was worse than the 18.7% analysts had projected.

Chipotle's troubles began in late 2015 when a string of food-borne illness outbreaks scared customers away.

The company tried several promotions, including giveaways, buy-one-get-one deals, and loyalty programs, to entice customers into its chains. That caused many analysts to warn that all of the promotions would have a major negative impact on profits.

Ells noted that 2016 has been the most challenging year in the company's history. He explained that same-store sales are difficult to predict, making it harder for management to have confidence in its prior guidance. In October, Chipotle forecast 2017 earnings of $10 per share.

While some are buying on today's dip in the Chipotle stock price, we think that's a bad idea. Here's why we see shares continuing to fall...