The S&P 500 had a great  year, it's true. You might think 2016 was the best year ever (note: it wasn't) given the breathless pace of media coverage over the past two months or so.

Media coverage is a notoriously bad way to get your mind around what the markets will do.

Research like my Money Calendar, on the other hand, is the best way to plan for the future. No one can say with 100% certainty what will happen over the next 12 months, but a system that looks back at 10 years' worth of daily price data on 250 of the market's absolute best stocks is the next best thing to a crystal ball.

So let me show you what the hard data is saying about the first few months of 2017.

January Isn't a Good Time to Be "All Bull"

The "Trump Bump" boosted shares by more than $1 trillion in an extraordinary rally, but the Money Calendar can't be fooled by hype.

A deep dive into the S&P 500 Index SPDR ETF  (NYSE Arca: SPY), which tracks the price and yield performance of the S&P 500 index itself, tells us to be wary of the markets going much higher from here in the short term.

The famous "January Effect," for instance, which holds that stocks outperform in January, is shaping up to be considerably less powerful than most investors believe it to be. SPY, for instance, only sees gains about half the time, and when it drops, it does so by about 0.3% on average.

My research shows that, barring a notable exception you'll see in a minute, many sectors have a hard time finding (and keeping) upward momentum.

You can see here on the Money Calendar that January tends to break bearish for the first two weeks of the month. It should be stuck in neutral for a week and then gradually turn more and more bullish. 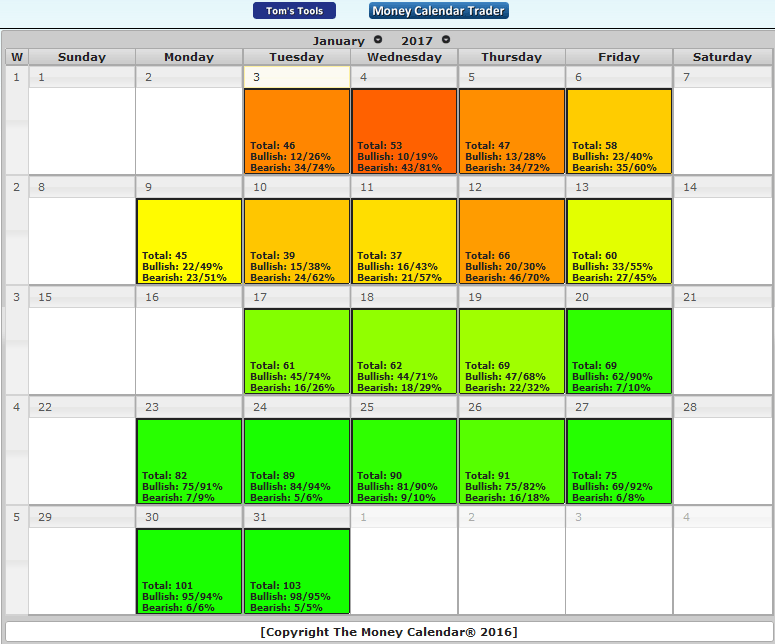 Traders who want to ride that wave should look at healthcare. The Money Calendar indicates it should be a bright spot in the early part of this year.

You could pick stocks to play, but the easiest way to participate in the gains is to hold the S&P 500 Health Care Select Sector SPDR ETF (NYSE Arca: XLV) and juice your gains with covered calls on it. This ETF has traded higher in January 61% of the time, going back to 1988.

Of course, January is only one month. We can look out quite a bit further into the year by looking back at what's happened before and at the price activity on the S&P 500 ETF.

I'm not predicting, and the Money Calendar isn't calling for, any major decline, but history shows the markets don't exactly go ballistic during a president's first year in office.

The SPY chart I'm going to show you reveals some significant chop that we should see again and again in 2017.

Not that that's anything to be afraid of - stocks have to move, up or down, for traders to make money.

How Where We've Been Shows Where We'll Go

No matter how you feel about him, the incoming Trump administration will be a powerful tailwind to the markets... at least initially.

The "Trump Bump" was the most powerful signal yet of optimism in the markets, over the prospect that the new administration and Congress just might actually do what they say they're going to do and pull the trigger on tax reform, decreasing regulation, and kickstarting an infrastructure buildout that should add scores of new jobs.

Still, as I said, history shows us that a president's first year in office usually isn't great for the markets. I think we're in for some chop over the next few months, starting with a January pullback from the dizzying highs we've been flirting with.

You can see why I expect the action to be "up and down" in this chart I made of SPY in 2016. It's history, sure, but it's important, because almost always, old resistance becomes new support. 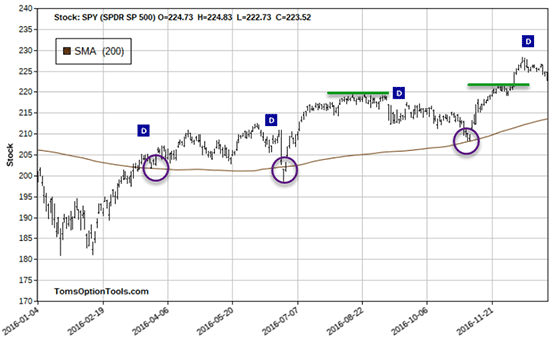 I have drawn in two green lines in the above chart to indicate old resistance (and new support) points for the SPY. These are likely to be price points to which the SPY retraces during that pullback I mentioned. You can use these pullbacks to cash in with puts on the SPY, too.

If those price points don't hold as support there is always the 200-day Simple Moving Average, (200SMA) that I would use as my longer-term support price area. You can see three prior cases over last year (shown by the purple circles on the chart), where SPY retraced to the 200-day SMA, found support, and moved higher.

So it's going to be to everyone's advantage to stay diversified and protected against retracements and choppy, sidways-ish markets in 2017.

I'm giving all my Power Profit Trades readers my favorite protective options play for this year. Click here to join us and you'll get my full "four-corners" market forecast with ways to make money on stocks, oil, bonds, currencies, and more in 2017. There's no charge, and it's the most fun you'll ever have learning how to trade.