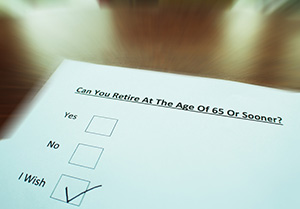 In addition to knowing the best investments to make when heading into retirement, it's also important to know the obstacles retirees face, so you can take steps now to avoid them.

We put together five of the biggest retirement obstacles that can rob unsuspecting retirees of their hard-earned money.

Don't let your retirement savings get eaten by government intervention or tax consequences. Check out our list to be "in the know" about retiring in 2017.

Obstacles Retirees Face in 2017 No. 5: Not Saving Enough Money

An April 2015 survey done by the Employee Benefits Research Institute found more than one in 10 workers think they'll need to save at least $1.5 million to retire comfortably.

That's up from $1 million, which used to be the industry standard for retirement savings 10 to 12 years ago, according to USA Today. Additionally, David Weliver, founder of the finance website Money Under 30, said using the $1 million rule of thumb could leave adults short on cash in their retirement years.

A big reason for this is longer lifespans.

The trend of living longer has caused certified financial planners, like Elizabeth Grahsl, to recommend her clients save enough retirement money to cover 25 years of expenses. In order to do so, resources like Fidelity suggest workers aim to save at least eight times their ending salary by retirement.

Based on last year's median household income, that means pre-retirees should have $429,000 in savings by age 60. But according to a BlackRock survey, the average baby boomer has only $136,200 saved for retirement.

Even worse, 55% of adults over 55 claimed to have no retirement savings, according to a GoBankingRates study.

A study done by JAMA Internal Medicine revealed that healthcare costs are expected to increase, going from $190,000 for retirees in 2005 to $245,000 for those retiring today.

A 65-year-old couple retiring in 2016 was expected to spend an average of $260,000 on medical expenses over the next 20 years. That's excluding the cost of any additional long-term care, according to Fidelity.

And the worst part is retirees aren't planning for these increasing healthcare costs. According to a survey done by Nationwide Retirement Institute, 48% of retirees or near retirees said they don't speak to their financial advisor about the costs [of medical care] because "it's a personal issue."

Additionally, more than half of the participants said they were "very or somewhat concerned" that increased medical expenses would deplete the assets they had hoped to leave their children.

Obstacles Retirees Face in 2017 No. 3: Social Security Is Running Out

Reading this retirement article is scary, very scary. I am retiring at the end of 2017 from a job I don't like, at age 65, without a million dollar 401K or 8 times my salary in cash. Sorry, folks, I am not even remotely close to those amounts. Like many, many others, life happened between the time I started working at age 13 and now. And yes, it depleted my cash, savings, and a lot more. Unlike many others, or perhaps like many others, I did not work for employers who offered retirement plans until 1999, when I was about 47 years old-I should have been well on the way to retirement savings at that time. Before that, I had a husband who drained my cash on a daily basis. Retirement was not on my agenda then. If I had to have the amounts of cash that are recommended in your article in place before I stopped working I'd be working until I was 125 years old and beyond.

So, I laid it all out on the table, stopped listening to Suzy Ormond (sorry, Suzy, you are very smart and a seemingly nice person, but your big scary numbers don't work for me, if not most), made a list of the needs and the wants (do we HAVE to travel and see the world all the time???? It's the response I get when I talk to soon-to-be retirees about what their plans are), made some serious fiscal decisions and even more serious changes, paid off my debt, unloaded the cash draining husband, developed a serious savings plan and some other sources of income, and picked a date to get off my stinky merry go round and stop work as I know it at the end of this year. Will I NOT work moving forward? No, I will not. I will simply work differently and be a lot happier person for my efforts.

Perhaps doing what I did in terms of sitting down and realistically laying it all out (no 'financial software' was involved to do this, just a calculator and a tablet computer with Excel) will help other soon-to-be retirees sort things out, because reading this kind of doom and gloom which may or may not happen (especially with the incoming Administration) can shed a weird colored light on what is supposed to be a happy life event. I found out that I really didn't need a whole lot to be content. I am not, nor have I ever been rich-no inheritances or windfalls were ever dropped on me in my life, and no plans to have that happen in my lifetime. But perhaps my definition of rich is different than others, because I am rich in many other ways besides cash and assets. And, our lives can change at any moment, completely unannounced. The info you present is good to know, heck, information is always good. How folks use that info and interpret it can effect their attitude moving forward. Am I scared? Sure I am, of lots of things. Heck I've worked since I was 13 years old, am soon to turn 65, and suddenly there will be no more workdays and big paychecks. A little fear can make you work a bit harder for your goals….but a lot of fear can prevent you from reaching them.

Good luck to all you folks about to retire out there, I hope you can sort it all out and retire happy, with enough cash/assets to suit you, whatever they may be! I'm going to do just that this coming December-I'll be happy and a bit cash poor by comparison, but I most certainly will be OK…..there is no other way to be!