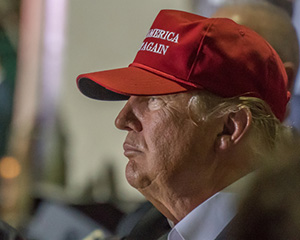 The Dow shot up 9% after Donald Trump won the election on Nov. 8, but as the "Trump rally" ends, investors are wondering if there will be a  stock market crash after Trump's inauguration.

The Dow has closed at a new record high 17 times since Election Day. It came within a point of breaking through the 20,000 level on Jan. 6. The S&P 500 and Nasdaq have also hit all-time highs since Nov. 8. Both indexes closed at record highs on the same day (Jan. 6), just over a week ago.

"Part of us thinks we should just sell the inauguration," reads a research report from Morgan Stanley.

The inauguration, coupled with stocks at soaring highs, is prompting fears of a sell-off that could lead to a market crash in 2017.

But investors shouldn't fear. Our experts at Money Morning think the conventional wisdom is wrong. We'll tell you why, but first we want to show you why some investors are wondering if stocks will crash in 2017…

Is the Stock Market Too High?

Stocks are at all-time highs, but they haven't been driven by economic performance.

If the economy isn't pushing stock markets higher, then what is?

The biggest factor has been low interest rates.

The U.S. Federal Reserve slashed interest rates to 0.25% in 2008. That's made it very cheap to borrow money.

And that was the Fed's plan…

As the U.S. economy was in the middle of a recession, the Fed hoped low interest rates would encourage businesses to spend more money and grow the economy.

But the Fed was only half right.

Don't Miss: Rare gold anomaly – an event so rare, it's only happened twice in 20 years! And it's about to happen again. Find out more.

Corporations took advantage of low interest rates and have borrowed $1.9 trillion since 2008. And they spent the money purchasing shares of their own stock.

Corporations have repurchased $2.1 trillion of their own shares since interest rates were slashed in 2008.

That's how low interest rates have helped push the Dow up 179% since 2009, even though the economy only grew 30% in the same time.

When stocks are overvalued at this level, investors start to think the next stock market crash could happen soon.

"President-elect Donald Trump had a simple message on the campaign trail – spend, spend, spend," says Fitz-Gerald. "That means hundreds of millions of dollars headed right into our economy."

But now that Trump is president, the market will react to Trump's actions, not his expectations. And overinflated stocks coupled with uncertainty over Trump's policies has investors on edge…

What Could Cause a Stock Market Crash After Trump's Inauguration?

"I can predict one thing about Trump's unpredictability: You can expect to see market volatility increase," says Lewitt.

Lewitt explains Trump's "deal-making" style of leadership is more "instinctual" and "spontaneous," which is a lot less polished than a typical politician.

"Trump is pro-business and pro-tax cuts," explains Lewitt, but "markets don't like chaos."

"That will bring much higher volatility in a highly leveraged financial system vulnerable to accidents."

Once Trump is sworn in as president at noon today, the markets will begin to react to his ability to deliver on investor expectations. If reality doesn't meet expectations, a stock market pullback  could be the result. And that will only stoke more fears of a stock market crash.

But again, panicking is the worst thing an investor can do now.

Fitz-Gerald correctly predicted the Trump rally before the election during a Nov. 2 appearance on FOX Business Network, when nearly every other analyst said the opposite.

Now, Fitz-Gerald has another prediction about the stock market in 2017. Here's how he says to play the inauguration, whether there's a stock market crash coming or not…

How to Profit from the Next Stock Market Crash