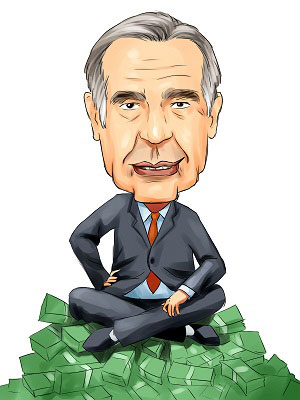 On Thursday, Dec. 22, 2016, Carl Icahn made more money in the stock market than anyone else in the world.

The S&P 500 fell 0.19% that day, and the Dow fell 0.12%, while Carl Icahn's investments gained him a staggering $510 million. That's more than any investor, anywhere, according to Forbes.

The gain pushed Icahn's holdings through Icahn Enterprises up 8%, meaning his $6.9 billion stake went to $7.3 billion.

This one-day boost, more than many people make in a lifetime, stems from the news that Icahn will hold a new, cozy role in the Trump administration. On Dec. 21, then President-elect Donald Trump's transition team named Carl Icahn as a "special adviser" for regulatory reform.

Trump reportedly wants Icahn to use his business pedigree to help the president roll back regulations on U.S. industries and business.

This position is not an official government job; Icahn is not considered to be a federal employee. Icahn won't get paid and won't have to give up his current business dealings.

But it has prompted a lot of questions as to whether or not it's ethical for Icahn to influence regulation and policy, when he has the potential to make billions of dollars on these changes.

"If Carl Icahn is competent, he will make an enormous amount of money from this role. It is outrageous to have people making big financial bets in markets while enjoying unique, early access to policy-making intelligence," Revolving Door Project's Jeff Hauser told Politico's "Morning Money."

Icahn's response to this "conflict of interest": "It's almost ridiculous to say, I'm going to give my opinion to Donald, but I shouldn't own stock. It's like, to me, crazy."

Here's just how much Icahn stands to gain in this historically unusual - but incredibly profitable - position of power...