Legendary investor Warren Buffett released his annual letter to Berkshire Hathaway shareholders over the weekend, sending many "experts" and investors into a frenzy as they try mimic Buffett's investing style and, therefore, his profits.

You shouldn't try to.

I know that's heresy in an era when the Oracle of Omaha is rightfully lauded as one of the world's greatest, but simply mirroring what he does will not get you where you want to go. Chances are, it won't produce the returns he gets, either.

Here are three reasons you shouldn't try to invest like Warren Buffett. 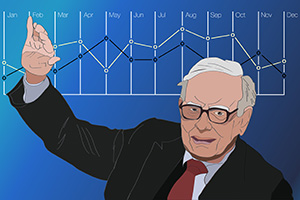 It's well-known that Berkshire Hathaway has averaged an annual return of about 20% in the 52 years since Buffett got to work there. According to Buffett's 2017 letter to shareholders, the company added more than $27.5 billion in net gains across 2016.

No ifs, ands, or buts about it... that's a fabulous track record over a very long period of time. It's consistent, it's undeniably robust, and it's worth noting that the S&P 500's average annual gain over the same time frame was only 9.9%.

However, it's also misleading.

There are dozens of books that will tell you Buffett has his method down cold and that he's a master at planning long-term moves and spotting undervalued companies with low-risk, high-upside prospects. And that's true.

But if Buffett were given a dose of truth serum before being asked to divulge his investing secret at a TED Talk, I suspect he'd give a one-word answer: leverage. Without that, his returns wouldn't be all that great. In fact, according to The Economist, they would have been "unspectacular."

People forget that Berkshire Hathaway, in addition to being a conglomerate holding company with a vast array of investments, is also an insurance company. Like all insurance companies, it commands a float - money that is counted twice because it's been paid out by insurance carriers, but will have to be returned later to pay out a fraction of premiums as required by law.

Berkshire Hathaway's float - which now stands at a formidable $84 billion - essentially functions as a massive pool of capital it can borrow at an estimated 2.2% interest. That's three full percentage points and then some below the going rate if you or I were to try and obtain similar financing, or the average short-term financing costs of the U.S. government over the same time frame, according to The Economist.

In other words, Buffett is banking the big bucks because he's leveraged up to his eyeballs and, like most insurance companies, has a really large investment company operating by virtue of the insurance premiums it collects.

Let me give you an example of what a difference this makes and why leverage is a dirty little secret.

Now, what if you had put $10,000 into something that wasn't leveraged, required no management, had no counterparty risk, and no stock market risk? If the financial system's house of cards collapsed, it would do just fine and you'd have $43,100 today. Which would constitute the better investment … Berkshire … or gold?

Most would say Berkshire, because the return was marginally higher, but when you look at the relative risks, was it really the best choice? Looks like a no brainer in hindsight, because hindsight is 20/20. But you have to make risk-adjusted choices without foreknowledge.

Looking forward, with stocks at their highest valuations in history based on several metrics and gold wildly undervalued in purchasing power adjusted terms and as measured against the skyrocketing supply of "money" issued worldwide, which would you choose for the next 10 or 15 years? Keep in mind, Uncle disagrees with me on both scores. He says stocks are still relatively cheap … and he hates gold. Talkin' his book.

The truth is, Uncle underperformed gold right up till this last little frenzied run in the markets, and it's very likely he'll significantly underperform going forward. Why? Because the credit-based economy that served up such a nice environment for his companies for the last 40 years is now at the breaking point. And when it breaks, would you rather be holding real money … something rare … or the stock of sugary drink makers and airline companies?

Oh, and it won't be long before Uncle is pushin' up daisies. Have you seen what the man eats and drinks? It's a miracle he's made it this far. Gold will still be just an inert piece of metal, as dead as Warren … but here's the difference. It'll still be performing its function of a store of value in an unstable world.