The 124-year-old retailer is facing its biggest - and arguably its most drawn-out - crisis ever. 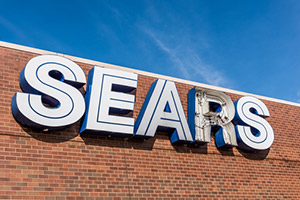 You see, over the past five years Sears Holdings Corp. (NYSE: SHLD) has been bleeding money and selling off precious assets in order to stay afloat. Just on Jan. 4, Sears entered into a $500 million committed secured loan facility secured by mortgages on 46 Sears properties.

The beleaguered company even tried to stay afloat by selling its signature Craftsman brand that month, in addition to shuttering over 150 stores and laying off thousands of employees.

Indeed, Sears is a victim of the most volatile time in consumer spending history.

Here's how America's most beloved department store failed and who we expect to follow suit...

The Slow Death of Sears

So what went horribly, horribly wrong?

Eddie Lampert took over as CEO in 2013. At the time, he was a Wall Street prodigy promising a turnaround. But it didn't take long for Lampert's unconventional management style to strike a nerve with employees...

Lampert rarely made an appearance at Sears' headquarters, BI reported. In fact, the chairman prefers to stay off the coast of Miami behind a desk dressed up with the Sears logo.

"The only way you see Eddie is through a screen," one former executive told BI. "We used to joke about who had to go upstairs to get fixed and see Oz."

And allegedly, on the rare occasion that Lampert did personally attend a meeting, the outcome was usually bleak.

Lampert has been known to get so angry in these meetings, particularly when challenged, that employees gossip about who is getting ushered into the conference room on any given day to "get their knees cut off," one former manager told BI.

Lampert's behavior may be the cause behind numerous employees giving up on the retailer...

You see, there have been an unusual number of high-level departures from Sears in the past several years. At least 67 executives - vice-president level or higher - have left the company just within the past two years, according to LinkedIn data gathered by BI.

"There are so many people running for the door not just because the ship is sinking, but because the captain of the ship is screaming at them, blaming it on them, and telling them it's their fault," one former vice president said to BI.

How to Cash In on a Dying Industry: Over 40 retail stocks across America are DOOMED to fail. But we can help you make up to $100,000 on every single one of them. Learn more…

"No one believes in Eddie's vision," a former employee told BI on Jan. 7. "He has just gone rogue."

"He would find a hole in the data and then explode," another executive told Business Insider.  "Then there would be a 45-minute rant."

"Lampert's physical absence might be better received if Sears, which also owns Kmart, was in better shape," Business Insider reported on Jan. 8.

Human capital isn't the only thing the 131-year-old company hasn't been able to hold onto...

Sears Has Been Hemorrhaging Money for Years

Sales are down 37% since early 2013, Sears' debt load has spiked to over $1.6 billion, and the company is losing well over $1 billion annually, according to data from Business Insider on Jan. 8.

We warned you about the imminent death of Sears last year...

"People only shop at Sears if they have to, not because they want to. Have you heard anybody talk about wanting to shop at Sears? That's like saying they want to go to the dentist, or they want to have a colonoscopy. Sears is a shopper's last choice. And that's why it's heading for the bone yard," warned Lewitt.

SHLD has fallen over 20% since Lewitt's warning.

And the centenarian isn't alone -- other well-established brick-and-mortar retailers are struggling to stay afloat because of e-commerce giants like Amazon.com Inc. (Nasdaq: AMZN), which was estimated by Slice Intelligence on Dec. 19 to account for over 55% of e-commerce growth.

This next company tops our "retail death watch" list...

This Department Store Chain Is on Its Deathbed

Just today (March 17), "Every Day Matters" retailer JCPenney Co. (NYSE: JCP) announced it would be shuttering 138 stores in 2017. The company also said about 5,000 employees will be cut because of the closures, which will begin as early as next month.

"We believe closing stores will allow us to adjust our business to effectively compete against the growing threat of online retailers," CEO Marvin Ellison said in a statement last month.

These closures come after the company sold its Plano, Texas, headquarters and surrounding 45 acres of land for a quick $353 million last month - which the company desperately needed.

You see, JCP has seen a significant drop in sales over the past decade. In 2006, the company reported sales of almost $20 billion. Ten years later, that yearly amount was just above $12 billion.

Shares of JCP traded along the unchanged line at $6.10 today (Friday) following the company's release of the store-closure list, though they have seen a 46% drop over the last 52 weeks.

How to Cash In on a Dying Industry: Unless you've been living under a rock, you are well aware that America's retail industry is entering extinction. Already dozens of the largest department stores and luxury retailers have filed for bankruptcy, while countless others are barely clinging to life. And as each day passes – and another retailer enters extinction – you could be missing out on potential $100,000 paydays from the downfall of each and every single one of them. Click here to learn more…

Sears and Pennys both would branch out then about the time that things were starting to pay off they would decide that that was not part of their core business. Sears cut catalogue sales (which became internet sales) Pennys got into automotive service then Eckards without knowing anything about those kinds of businesses and so on. Both companies lost sight of where they came from and why they were successful. The founders had a vision – the current crop of management does not know what that word means.