A door has opened for an ultra-rare but powerful anomaly in the stock market… It involves a precious metal, one that’s considered exceedingly more rare than gold. Get all the details.

Despite a 6% retreat this month, our 2017 platinum price forecast remains extremely bullish. In fact, Money Morning Resource Specialist Peter Krauth expects the price of platinum to soar 34.2% to $1,300 by the end of the year.

You see, platinum's recent decline has only been caused by short-term factors. The biggest drag on the platinum price this month has been the expectation of a rate hike, which eventually came on March 15. Dollar-denominated metals typically see a quick downward reaction to higher interest rates because they become more expensive to other currency holders.

But platinum prices are already recovering from the news, up a solid 3.4% to $968.80 over the last week. And we just came across another platinum catalyst that reinforces our strong platinum price prediction.

First, here are two reasons why Krauth – a 20-year veteran of the gold, silver, and platinum markets – is bullish on platinum prices in 2017… 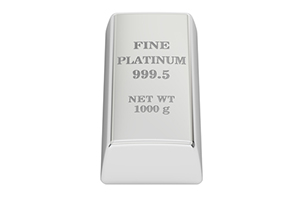 Reason No. 1: It's One of the World's Rarest Metals

The most important thing to know about platinum is that it's extremely rare to find – much rarer than gold and silver.

While platinum trades via futures contracts similar to gold and silver, far less platinum is actually extracted from the Earth each year. That's because it's overwhelmingly difficult to mine, which leads to sky-high operating costs and thinner profit margins.

According to Statista, the five largest platinum-mining countries are South Africa, Russia, Zimbabwe, Canada, and the United States, respectively. These nations produced 168.9 metric tons of platinum last year, making up 98% of total global output. Total gold output, on the other hand, came out to 3,100 metric tons. That's 17 times more output than platinum.

Platinum's natural rarity will remain a fundamental boost for platinum prices over the long term.

Reason No. 2: Platinum Is Crucial to the Growing Auto Industry

Platinum plays a huge role in the auto industry due to its use in catalytic converters.

A catalytic converter is a pollution-control device used in cars that makes emissions less toxic for the environment. Since 1975, the EPA has required auto manufacturers to install catalytic converters in everything from cars to motorcycles.

Platinum is a primary component of catalytic converters. About 43% of all consumed platinum is used in the converters, making it the biggest source of industrial platinum demand. It even beats out the 35% used in the jewelry market.

IHS Markit says total auto sales in Western Europe – which includes France and the UK – will rise by 1% in 2017. That would be an increase from roughly 14 million auto sales in 2016.

Remember, this is a conservative estimate. Analysts are waiting to see how the Brexit and elections in France and Germany will influence consumer spending this year.