When most investors think of the booming cannabis sector, they don't automatically think "high tech" or the life sciences.

That's a mistake - a potentially costly one.

For one thing, cannabinoids can be used to treat all sorts of ailments, from cancer to arthritis to insomnia, not to mention the high-tech applications exploding in the growth and consumption of legal marijuana.

But more importantly, cannabis investing is out on the "frontier."

As you'll see, that's one of the most profitable places you can be...

Get In (Way) Before the Crowd - It Pays

It's axiomatic in investing: Grab a good investment before it goes mainstream and everyone else, especially Wall Street, finds out about it, and you're looking at more upside. You can score massive gains moving into a technology or concept out on the "frontier."

And it doesn't have to be risky, either, when you've got the research to back up your thesis.

I'll show you what I mean; I've got a long history in frontier investing. Last year, I recommended a play in an "unattractive" stock Wall Street had written off as "just another player" in the crowded video game niche.

But my research told me this was an explosive, revolutionary disruptor in a potentially huge segment. A year later, my readers and I had the last laugh… and 264% in profits to show for it.

And we did it again in 2017 on another stock Wall Street wasn't paying attention to, booking 213% in gains on another play in the same space.

You can bet they're paying attention now.

That was just the beginning.

I've Seen This Kind of Potential Before 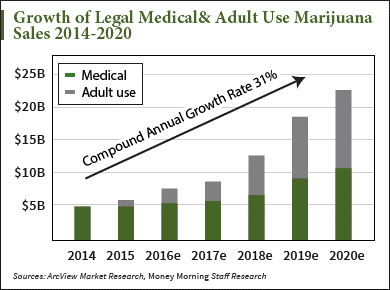 So, in tech, "frontier" is a synonym for huge wealth opportunities. And marijuana investing most definitely qualifies. Growth, retail, research, biotech, distribution, consumption - marijuana is a huge, diverse sector rich in profit opportunities, and we're adding more all the time.

You see, I've covered Silicon Valley for more than 32 years, and in the cannabis sector, I'm seeing the same level of innovation, creativity, leadership, and profitable risk-taking that's taken tech to the multitrillion-dollar heights it occupies today.

It's a potent partnership.

Let me give you an illustrative example of the kind of intellectual "cross-pollination" underway here.

According to an interview in SFGate, former CEO Jessica Billingsley and web operations honcho Amy Poinsett jumped on the huge opportunities opening up in Colorado's legal market, designing software solutions for tracking each cannabis plant "from seed to sale."

There are dozens more tech leaders out there doing the same, creating profit potential for us.

They can do the same for you, too.

Pls keep me informed. Thanks for sending me the newsletter. I hope to b in a position to invest within the next year.

So many Penny Pot stocks! I'd like to pick four and invest $50 each. Need advice first time investor. Grew up with weed I'm seventy now there must have been a reason? Someone help me out? Thanks; Dave,(Dave's not here)

I'd like to respond to you Dave. I am 64 and have been involved since I was 19. And as of now I own 38 marijuana stocks. FIRST: no matter what you read, you aren't going to get rich on a $50 investment. Unless you simply can't afford it? I suggest you put a little more to get started. Just like Mr. Robinson says, your goal will be to sale half when you get a double. And buy another. I have done it 10 times. So scrape up $2000 and buy 600 shares of MRPHF at $.88, Buy 1000 shares of BLOZF at $.58, Buy 5000 shares CBIS at $.085 and watch CBICF. It will be a good one after it quits dropping. $.35 today. It is a new one, a Canadian that claims after it bought two stores in Mesa, AZ that it will be the most profitable in Canada. buy at least 1400 shares of it when it starts going up. Look up the symbols, go to their web sites, get familiar with them and buy soon. BLOZF is way under the radar and is ready to come out with a Breathalyzer for pot.

There is a minimum investment of
$2000.00 with Ameritrade.

I want to buy some cannabis stocks. How do I go about finding the good ones?

Thank you for offering your great Money Morning newsletter.

I am on disability. I m trying to get out of poverty. How do I go about investing in good pot stock s. Thanks

Very interested in investing wisely in this market. Thank you for your hard work in discovering the gems.

Thank you for this opportunity. I hope to be able to invest by next year. Please keep teaching me.

Thank you for this opportunity.

Please keep me informed. This is a very young opportunity for many that do not have experience but would like to invest. I am all about Arizona, Colorado and Canadian sucess. Do not forget me.

I would like two or three of your top Pot stock

I'm ready to make some money

thanks for the info

i would like to look at the marijuana stocks

I am very interested. Please keep me informed.
Tim

I want to invest. Where do I go from here?