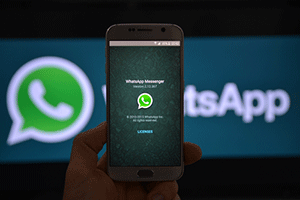 Earlier this week, a Jeffries Group banker was slapped with a $49,000 fine for using an encrypted messaging phone app to trade confidential client information.

He's not alone - thousands of Wall Street's elite have embraced WhatsApp as an easy and virtually untraceable way to circumvent compliance, get around the HR police, and keep bosses in the dark, Bloomberg reported on March 30.

And the U.S. Securities and Exchange Commission (SEC) is struggling to find a way to crack down...

Exactly What Is WhatsApp?

WhatsApp, owned by tech giant Facebook Inc. (Nasdaq: FB), is an end-to-end encrypted instant messaging app for smartphones. Basically, it allows users to send messages, photos, and videos back and forth that are essentially untraceable.

Once messages are deleted on the app, it's as though they never existed. Some settings even allow users to have the messages automatically deleted after a preset amount of time, similar to how Snap Inc. (NYSE: SNAP) works.

How Encrypted Messaging Is Used on Wall Street

How messaging apps like WhatsApp are used on the trading floor and beyond varies.

"At the big banks, employees will often use such apps to gossip about what they're looking to buy and sell, or even boast about a particularly profitable trade," an employee at a Wall Street firm told Bloomberg on March 30.

This may seem innocent enough, but here's the concern...

A "don't ask, don't tell" mindset prevails in most of these firms, according to Bloomberg - which means employees can get away with whatever they want.

Seems like anything that helps the bad guys out is big business, In the old days people were fired for breaking the rules today they are rewarded.

Well, they continue to reward this corrupt industry that serves no one but itself. It is a useless and criminal organization that could put a biker gang or drug cartel to shame. Any time they discover something about these false prophets they simply move on to find the next way to skim off the top and scam innocent people out of their money. Paying whatever fines the SEC or authority imposes on them is a joke.
Imagine if you will a common man taking money that he hasn't earned (in effect stealing) and using it to trade (illegal) insider information or to re-loan it at higher interest rates. A skill that a Chimpanzee could do and then sitting back collecting obscene amounts of bonuses for doing nothing but making society more poor and more indebt. Would such a person be jailed for committing a ponzi scheme of ridiculous simplicity and proportions?
I would hope so.
Would he be allowed to buy valuable companies and assets further adding to his ridiculous riches when all he was doing was counterfeiting currency to add leverage to his assets?
Welcome to the world of banking.
Oh I know, it's a big industry and of course "we don't want to damage the economy or put all those useful people out of work". After all the ongoing lying, cheating, stealing and corruption is so good for us all. Exactly what sort of message are we giving to our children. It's ok to do these things as long as you don't get caught and if you do well don't worry about it as we'll find another way to do it and keep you out of jail.
Truly moronic on a scale that is off the charts.

Maybe the Russians used WhatsApp to put their fake news about Hillary Clinton on Facebook and used bots to replicate and repeat them ad nauseam? The FBI might have a hard time following those hackers on WhatsApp. Too bad.