Anyone who chooses to invest in silver today (Friday, March 31) will set themselves up for a 31.5% return on their investment by the end of the year. 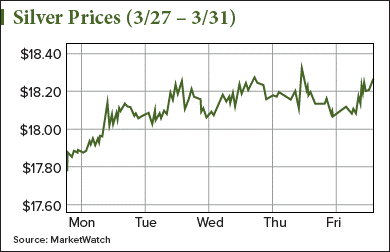 And Money Morning Resource Specialist Peter Krauth has identified one other factor that will push the price of silver 31.5% higher to $24 this year. It's a geopolitical crisis that deals with the ongoing currency turmoil in the world's most dominant silver nation.

Before we get into this crisis, here's why silver prices are on track for a big weekly gain...

This Silver Investing News Has Pushed Prices 2.8% Higher This Week

The big reason behind the silver price rally this week has been increased volatility in the stock market.

A door has opened for an ultra-rare but powerful anomaly in the stock market… It involves a precious metal, one that’s considered exceedingly more rare than gold. Get all the details.

The incredible rally came on the back of Trump's promises of deregulation and corporate tax cuts. In February, he said he would soon release his proposed tax plan that would cut corporate taxes from the current 35% to 15%.

But now markets are starting to worry that Trump's promised tax cuts won't go into effect anytime soon. Congress' fruitless effort to repeal and replace Obamacare has investors losing faith in Trump's ability to fulfill his promises. This has led to a market sell-off this month, with the Dow Jones falling for eight straight sessions from March 16 to March 27.

When the stock market drops, investors pile into safe-haven investments like silver. Safe havens are the kinds of investments that either maintain value or increase in value during market volatility. Instead of being used for short-term gains, they're typically held in one's portfolio over the long term.

That's why Krauth - a veteran of the gold and silver markets with over 20 years of experience - just identified a bullish catalyst for silver prices in 2017.

It's a controversial news story in the silver market's most powerful country that could send prices 31.5% higher to $24 this year.

Here's why it will have a tremendous impact on the price of silver...

This Country's Crisis Is Why You Should Invest in Silver Today