Last week, I showed you just how profitable "frontier investing" can be.

It's a deceptively simple, powerful approach I take for my Nova-X Report readers: Research a good investment, build a thesis, target the best stock before Street analysts know it exists, and let the profits come to you as the crowd piles in.

Silicon Valley is a hotbed of this kind of investing; one where my readers have been able to make a killing. Biotech and the life sciences are two others.

Cannabis investing is the latest and most profitable.

It's easier now than it's ever been to get wired into the growth.

And, thanks to what I'm about to show you, there's plenty of that on the way…

The Broadest Exposure to a Booming Sector

As recently as 2013, legally sanctioned "medical marijuana" was worth about $1.5 billion in sales. 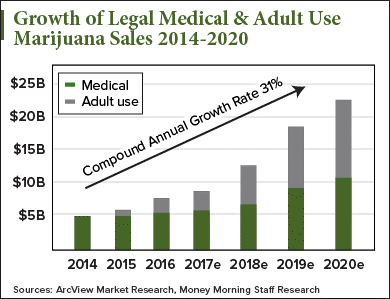 That represents huge, long-term profit potential for investors on the "frontier" right now.

There's been a new development, though, that, as I said, makes it easy to tap into the upside here.

Even better, it represents a massive leap forward in the credibility of the entire cannabis sector – irresistible bait for the "crowd" who are going to pour in and boost early investor profits.

This first-of-its-kind fund is composed of 14 Canadian and U.S. cannabis stocks.

A marijuana ETF offers a "one-stop shot" for broad sector exposure. What's more, it can limit losses and maximize upside, and, therefore, it offers one safe way to play the $6.7 billion North American cannabis market.

ETFs help protect investors through diversification that offsets losses from single stocks – after all, some marijuana stocks can be volatile.

I'm expecting a fresh round of gains to come in, thanks a revolutionary development up across the "frontier" in Canada.

Interesting article, I've been trading cannabis individual securities on the OTC for over two years and I don't agree with your article, let me explain. With the recent comments from the Trump administration and the pattern that has persisted with the past couple years, cannabis stocks are always sold off in the summer and bought up going into the new year. To buy now when the sector is being heavily shorted is not taking into account the sell off hapening. Shorts are in session, talk to me in October.

All interesting but unfortunately I cannot legitimately follow the discussion because I don't quite understand the position of the market being shorted. Please explain unless its too time consuming. Thanks.