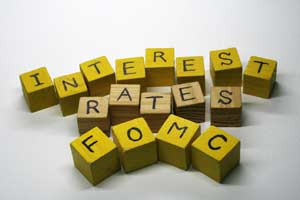 While the last two Fed rate hike decisions were largely expected, there are a lot of worrying details about this current Fed tightening cycle that are going unnoticed...

Yet the markets don't seem affected by the unknown aspect of the Fed policy at the moment, even though this policy could have serious repercussions for investors...

What Is Quantitative Easing and Why Is It So Dangerous?

Quantitative easing is a monetary policy where the central bank prints money to buy government bonds and other securities to introduce new money into the economy.

In the case of the 2008 market crash, the U.S. Federal Reserve bought $3.7 trillion worth of government bonds and mortgage-backed securities to stimulate the economy. This caused the Fed's balance sheet to balloon from about $800 billion before the crisis to $4.5 trillion by the time quantitative easing was ended.

Urgent: A perfect storm is brewing... bringing with it the greatest wealth event in 20 years. The cash windfall from this rare event is expected to reach a whopping $13 billion. Find out more.

Pumping the economy full of new money to stabilize it was just one goal of QE. The other was to keep long-term interest rates low. In order to meet that goal, the Fed bought long-term bonds.

Currently, the stance of the Fed in regard to its balance sheet is to reinvest the money as maturities expire. However, by buying shorter-term bonds, the effects of quantitative easing are shrinking.

We know the Fed is reinvesting its money in shorter-term bonds because in 2013 the average maturity of its balance sheet was seven-and-a-half years. Currently, it's about six years.

While the Fed is undoing some of the effects of quantitative easing, it still needs to unwind its balance sheet...

In the past, the Fed would buy shorter-term bonds and let them run down, or expire, without being reinvested.

And while that is likely still the route it's taking, there is a new factor at play this time: transparency.

Up until the mid-1990s, the Fed gave markets and the public very little information on its monetary policy. It wasn't until after the policy was enacted and finished that we would know what the Fed did.

This time around, the Fed will need to tell us what it plans to do since the Fed started releasing more information to the public in 1994.

Prior to 1994, the Fed released its decision on rates in the FOMC meeting minutes and there was little explanation as to how that decision was reached.

However, in 1994 the meeting minutes were modified to add a rationale for the policy action and descriptions of the economy.

By the time the market crash happened in 2008, statements about "balance of risks" in the economy, how individual FOMC members voted, and a forward-looking statement about policy were added.

That means that we will know how and when the Fed unwinds $3.7 trillion from its balance sheet. This kind of unwinding means that the private market will have to make up the difference.

Knowing this ahead of time could spook financial markets.

However, the bigger concern is the tightening cycle comes while the Fed is managing a weak economy... 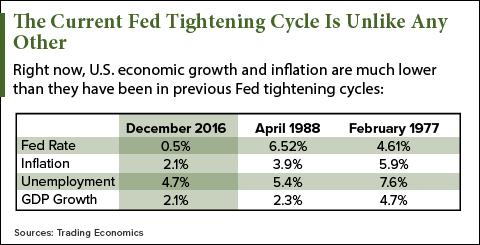 Generally speaking, the Fed raises rates in order to keep economic growth and inflation on a steady path.

That was definitely the case with the 1988 and 1977 tightening cycles, when inflation and economic growth were higher than today.

However, this time around rates have been the lowest in Fed history for almost a decade, along with weak economic growth and inflation.

The one strong spot in the current economy is the low unemployment rate, but that may not be enough to support the rate hikes.

But that tightening cycle in 1980 was due to inflation. August inflation that year was 12.9%. Inflation that high will cause the economy to slow, as seen by the shrinking GDP at the time.

Obviously, the current economic conditions are (barely) strong enough to warrant a tightening cycle. But it is still troubling that we are in uncharted territory with the current monetary policy.

We have neither an overly strong economy nor high inflation, so we have nothing to compare the current tightening cycle with to determine expected results.

This makes for a lot of unknowns, which markets hate. But they don't seem to be phased by the uncharted Fed territory at the moment.

But at the end of the day, no one knows how the unwinding of $3.7 trillion will impact the economy, and without Trump promises, the markets have little to go off of in the way of confidence.

Continue to check back to Money Morning for more updates on the Fed as it continues to raise rates.