Poor, beleaguered Greece hopes to get its next €7.1 billion ($7.5 billion) bailout payment in June, just in time to make roughly €6 billion ($6.5 billion) in payments to creditors in July.

Now, tense negotiations in Valetta, Malta, last month appeared to smooth some stumbling blocks to releasing the latest tranche of the €86 billion ($92 billion) "rescue package," but this deal is not a done deal.

Then again, it's likely Greece will get its next handout... but there's a better than even chance it might be its last.

And that should have investors all over the world, even in booming America, concerned.

You need to know what could happen...

We've Got to Talk Honestly 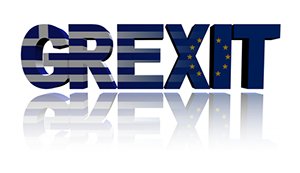 The "diplomat-ese" coming out of Valetta, spouted for the benefit of mass media consumption, contains all sorts of pleasant, encouraging words, like "breakthrough" and "agreement."

Unfortunately, it's mostly bull. And the public doesn't know it.

There are some serious questions investors need to have answered - and answered frankly - so they can be properly informed.

Who's really propping up Greece, and why are they doing it?

What happens to the markets if Greece defaults, or, much worse, repudiates its debts?

These are just the biggies. Let me show you what's going on...

How Everyone Got Dragged into This Mess

Since, as always, we're being honest here: Greece lied and cheated its way into the European Union. They had a lot of help from Goldman Sachs.

Under the Maastricht Treaty, the rules that govern the European Union and created the euro, a country that wanted into the Union and the common currency had to have "sound fiscal policies," including debt limited to 60% of GDP and annual deficits not greater than 3% of GDP.

Whether it was a game that economically strong EU countries knew was being played has never been openly questioned. However, in all likelihood, it was no secret.

The euro was initially a boon to all countries that adopted it, but lately, it's tough to escape the fact that it's serving some countries better than others lately.

In fact, there won’t be a market in the world that won’t crash.

Nowhere is that better illustrated than in Greece - the posterchild example of what went right then so terribly wrong, and Germany, where it all went right.

Germany is essentially the backbone of the Union - and the euro. And of course it was a powerhouse even before the EU formally came into being.

But Germany had a growing problem, precisely because it was an economic and export juggernaut with a strong currency, the old deutschmark.

Countries across Europe, especially the so-called "Southern Tier" of Portugal, Spain, Italy, and Greece, who weren't doing as well economically as Germany, had currencies that reflected their tougher economic conditions.

Since their individual escudos, pesetas, lire, and drachmas were weak relative to Germany's deutschemark, Germany's exports were increasingly expensive to buy with their weaker currencies. 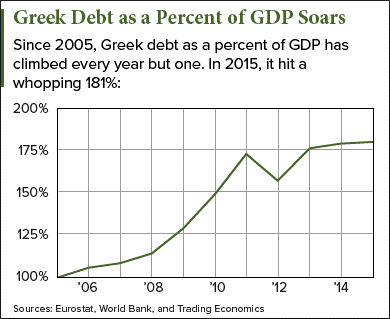 A Union with a common currency would eliminate cross-currency differences and make Germany's exports to the rest of the Eurozone appear to be cheaper - or at least not an obstacle in terms of currency differentials.

And since it was easier to borrow in a common currency, interest rates came down and euro loans became readily available in quantity across the continent.

Greece borrowed and spent while Germany exported more and more.

Then of course came the financial crisis of 2008 and the global Great Recession that followed. Southern European countries that had converted to the euro and borrowed heavily were leveraged close to insolvency and had to be bailed out.

The backing for all those bailouts came from none other than the European Central Bank (ECB), the Union's collective central bank.

And we all know how helpful and honest and altruistic central banks are...

In Reality, the ECB Is a Fantasy (and a Scam)

Enjoy your market insight and truth.

if the US does not solve security issues at the southern border, we could become France.

And then there is the IMF waiting in the wings with SDRs.

It seems obvious that the next Market "crash" will start with the overleveraged fantasy fiat propped up Financial Sector. How long can these crooks keep the books cooked and make money out of thin air???? It's not "if" but "when" it all comes down.

you should be a president somewhere or even a high ranking judge. i love your articles…because they are a true reflection of what is incorrect, financially, geopolitically and 'morally' (where has that human attribute gone:morals?).

put those drongos in the slammer never to be released. i was taught, when young, to be true, honest and benevolent to my fellow humans. now we have examples of complete and utter fraud, corruption and lies by 'upstanding people' of all persuasions. and i like pres. putin. he is a man for his country getting woeful press from the wetern media. still the western media is a laugh anyway. its a fraud like everything else in our western world. i know many thousands of your countrymen who would love to have putin as president, after you of course. i am afraid your people are being treated like mushrooms in that no mention is made of the complete freezing of the usa air base in alaska..no not freeze as in cold i mean freeze as in all technology just frozen by the russians over an articler in vanity fair. have a read its very interesting. and any more of that tripe from vanity fair or anywhere else and the entire usa will be tchno. frozen. you don't need to believe this it is all in the experience that will make a belief confirmed. i wish there were more people like you and other commentators in congress(usa) or parliament here in oz. cheers, ron

What about the UK threatening not to pay its debts to the EU and just Brexit?