The days when marijuana "edibles" were limited to a bunch of teens passing around a pan of homemade pot-laced Duncan Hines brownies are long over.

The legal marijuana industry now grosses more than $5.4 billion a year through the sale of cannabis-infused food and drinks - for people who want to avoid the harmful effects of smoking, but still want the drug's potent effects. And as marijuana continues its march to legalization, that number will continue to climb.

Over the past several decades, "edibles" have become one of the most lucrative legal marijuana opportunities on the market.

I want to show you one of my favorite speculative plays in this booming pot-stock niche right now. I recommended it last September in my Nova X-Report "weed investors' bible," The Roadmap to Marijuana Millions, and some of the peak gains we've seen here have been extraordinary.

I can't think of a better way to show everyone the massive profit potential in legal weed investing...

Edibles Are a Huge Slice of Marijuana Business

The Colorado Department of Revenue reported that, in 2014, 5 million marijuana edibles were sold in the state. And according to The Denver Post, marijuana-infused edibles account for roughly 45% of the legal marijuana marketplace. A February report by Bloomberg says that edibles account for 50% of the revenue earned by Colorado dispensaries.

Just look at so-called "microdosed" edibles - one of the fastest-growing sectors of the industry.

Microdosed products - from marijuana-infused chocolates and sweets to barbecue sauce and bottled water - contain just five to 10 milligrams of tetrahydrocannabinol (THC), the psychoactive ingredient in marijuana that gives you the high. With such small doses, eaters feel the beneficial aspects of marijuana but generally won't get the unwanted side effects, like feeling "too high." 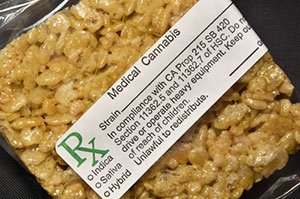 Dr. Dustin Sulak, the medical director for Integr8 Health in Maine, has been exploring the benefits of microdosed edibles with patients.

Last year, he told United Patients Group, "I discovered that most people have a certain threshold dosage of cannabis, below which they'll actually experience a gradual increase in health benefits over time, and above which they'll start building tolerance, experiencing diminishing benefits, and more side effects." Dr. Sulak explained that he has witnessed cancer patients respond much better to lower doses than the usual higher dose recommended - while emphasizing the need to experiment as each individual is different.

On the consumer front, companies like Kiva Confections are revolutionizing the microdosing game. Kiva Terra Bites, for example, are bite-sized candies coated in milk and white chocolate infused with marijuana extract. A tin averages $18 and contains 24 servings.

Now, Kiva is a small, privately held business, one I'm watching closely because it may go public in the future.

But there are investment opportunities aplenty in the edible market. Here's one I really like...

I would like to see one or two stocks do well. So far this has not happened for me even with all the hype and braggadocio.

Ditto for me John.

I have purchased several stocks from 2 reports that I purchased for $450.00 and they seem to stay more red than green. I am very worried but I truly believe that all the variable avenues within the coming marijuana market money is definitely going to be made changing lives. I want to make an amazing financial change so I can give my husband of 34 years the best gift – take away his burden of taking care of us in our retirement. He has been employed since he was 18 and he is 59 now. I want him to be able to retire within 2 – 5 years and hopefully the leads that I have been given will allow me to give the best gift that I can. Lastly, I just wanted to say Thank you to both report authors for making the information affordable. I wish us All the Luck that this is going to be abundant not seen since prohibition was ended.

I have bought into several of these stocks knowing very well that they are volatile, and some may fail. That's the risk you take when playing penny stocks and you have to be willing to loose a little in these high risk stocks because when one hits it can be very lucrative. Going into these lock stock and barrel is kinda like jumping into an active volcano and thinking you won't get burned. ;) But hey, you might get lucky and hit a ledge on the way down and climb your way back up. Be willing to let go of what you invest in these small stocks and maybe you'll be celebrating later on down the road.

Could it help breast cancer

THC is being used to treat cancer of all types… It certainly helped me with
my fight – I'm into my fifth year after complex (head & neck) cancer treatments.
CBD helps with hundreds of ailments, and it's legal in a 50 states.

I heard that alot of the big shots in these companies have sold some shares, thus keeping the stock prices down, hopefully this will change in time