As I expected, the markets took us through two very typical responses last week…

First, we had a relief rally after the French presidential vote generated a positive surprise.

Then we caught a classic "sell the news" response to the Trump tax plan.

The French presidential election is still a big deal because of its implication for the continued health of the European Union (EU).

As we discussed last week, had the two anti-EU candidates won, the markets would have had a severe sell-off.

I recommended we refrain from trying to "handicap" the result ahead of time – a potentially costly move – and take a position once the result became clear.

That was absolutely the right way to play it.

Now, I mention this not to look backwards or gloat, but because the confluence of circumstances has contributed to a technical setup I'm looking at that's going to continue to influence the opportunities ahead.

There will be a way to play what's coming next, too…

The markets got the result they were expecting, which means, surprisingly, the pollsters finally got an election right.

After a pretty dismal run that included misses in the U.S. presidential election, Brexit, Scotland, Greece, Israel, and even a big miss going back to the 2014 U.S. mid-term congressional elections, it was becoming easy to second-guess or even dismiss poll results outright.

I'm looking for the markets to be pushed around by political and geopolitical news.

I'm not yet convinced that pollsters have figured things out yet. Until further notice, I'll chalk this up to the fact that even a blind squirrel finds a nut every now and then… 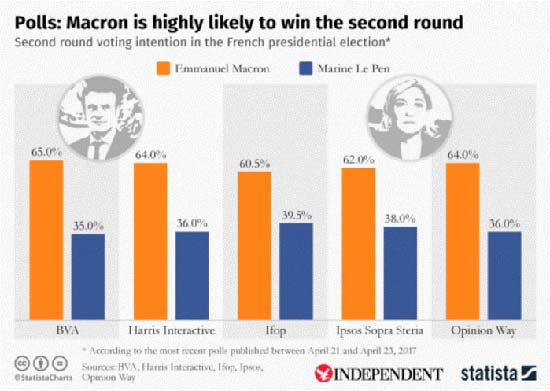 So Le Pen keeps her loyalists, those who voted for her in the preliminary, and not much else, while Macron will pick up voters from almost every other candidate.

As we can see on the chart below, the election results had a broad reach on the markets – fueling a rally in European, U.S., and French exchanges…