(Kitco News) – World stock markets were mostly lower overnight, on growing tensions in the White House that could cripple the Trump presidency in the coming months, or worse. News that a special counselor has been procured by Congress to investigate Russia's involvement in the last U.S. presidential election is the latest shoe to drop on a Trump presidency that is now in crisis mode.

Many market watchers now fear Trump's administration is paralyzed and won't be able to enact its pro-business legislation. U.S. stock indexes are pointed toward further losses when the U.S. day session begins Thursday.

Safe-haven assets gold and U.S. Treasuries have seen their prices spike up on the keen political uncertainty in the U.S.  Gold, T-Bond and T-Note futures prices are firmer Thursday morning, following their sharp gains Wednesday. Look for the safe-haven markets to continue to see buying support in the near term. The Trump crisis will not fade any time soon. 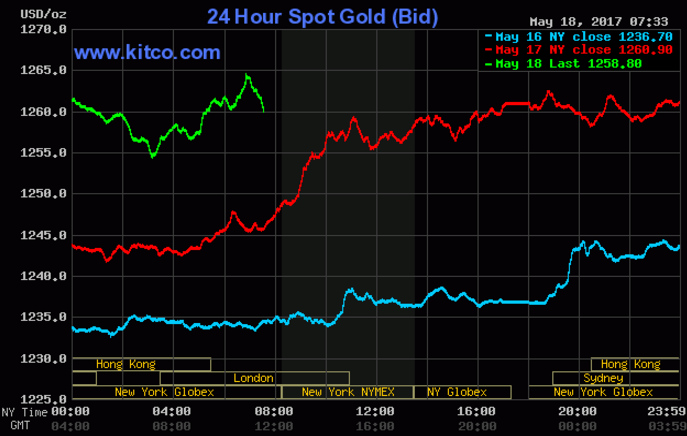 The U.S. dollar index hit another six-month low overnight and has been pressured in large part recently by the Trump Administration turmoil. Up to this week, the marketplace had been mostly ignoring the politics in Washington, D.C.