The Russell 2000 Index is up 21.1% over the last year, beating the Dow Jones' 18.1% gain. That booming performance in the small-cap sector is why we're going to show you where to find the best small-cap stocks for strong, long-term returns. 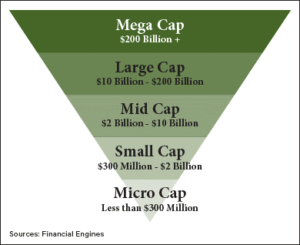 Small-cap companies are the ones with a market cap between roughly $300 million and $2 billion. These types of stocks are attractive to investors because they boast low share prices yet high growth potential. For example, small-cap stock AgroFresh Solutions Inc. (Nasdaq: AGFS) has more than doubled in price this year, gaining 164% from $2.65 to $7.01 in the first five months of 2017.

And according to Money Morning Small-Cap Specialist Sid Riggs, the best way to find these money-doubling opportunities is to target the industries experiencing the highest growth. "Whenever possible, I want the industry, as a whole, to be the main driver of revenue growth," Sid said on May 15. "Once that's in place, I can drill down to find the company with a differentiating product or service that can give it a first-mover advantage or create dominant market share."

Here are four areas of the market that will provide the best small-cap profit plays this year...

Look for the Biggest Small-Cap Profits in These 3 Industries

According to Sid, the industries poised to dish out the biggest profits to shareholders are disruptive industries. That's why the first two we're looking at are machine learning and virtual reality (VR).

Machine learning is the burgeoning area of computer science in which computers are taught to analyze data and find trends without specifically being programmed to do so. It's essentially teaching computers to keep teaching themselves by giving them huge amounts of accessible data.

One of the most prominent products of machine learning is the driverless car. By distinguishing different objects on the road like pedestrians or other vehicles, the driverless car can remember the images of the objects for later use.

Another application of machine learning you may be familiar with is Netflix Inc.'s (Nasdaq: NFLX) content recommendations based on what you've previously watched.

According to British research firm MarketsandMarkets, the Machine Learning as a Service (MLaaS) market could grow to $3.8 billion by 2021. That would be up an incredible 519% from $613.4 million last year.

The second industry primed for small-cap profits is virtual reality (VR). This field usually refers to video game headsets that create realistic images and sounds that enhance the user's experience and make it feel more physical.

The arguable leader in the VR market right now is Facebook Inc. (Nasdaq: FB). The social media company bought Oculus VR and its signature device, Oculus Rift, back in 2014 for $2.3 billion. Since then, the Rift has become one of the most recognizable VR devices on the market.

But small-cap companies are also tapping into the VR industry. One example is Himax Technologies Inc. (Nasdaq ADR: HIMX), a Taiwanese supplier of display circuits for VR headsets like Oculus Rift. With TechCrunch projecting the VR market to rake in revenue of $25 billion by 2021, it's clear small caps are itching to get into the exploding market.

The third industry to find the best small-cap stocks is fiber optic network expansion. While it's not disruptive like machine learning and VR, Sid says it's a clear source of profit due to the infinite amount of Internet activity nowadays.

"It's a no-brainer," Sid told Money Morning Members. "The amount of data (fueled by online video, music, file sharing, etc.) traveling across the Internet is exploding."

Finally, the fourth industry we're targeting is mobile banking. Sid believes the banking industry's rapid evolution into a tech-based market could yield billions for companies tapping into it early.

The market for mobile financial transactions is expected to grow by an incredible 716% by 2021. Statista reports that revenue for the firms making these transactions possible will be upwards of $865 billion by that same year.

And Sid just found one small-cap stock poised to rally from the banking industry's transformation.

Here's his most recent small-cap recommendation, which could post a strong 29.4% return over the next 12 months...