Earlier this week, I showed you how, after a generation of running amok, financialization of the U.S. economy is close to killing - forever - the once-mighty American middle class.

Well, these forces have "help."

Globalization, the long-armed henchman of financialization, is an insidious contributor to the widening income gap and wealth inequality in the United States.

It's essentially another nail in the coffin of the middle class.

Here's the thing: It's possible to stop both of these disasters before it really is too late.

Undoing their destructive effects will be hard, don't get me wrong. There's at least a generation's worth of damage and many powerful people who are profiting from the system being upheld just the way it is.

Here's what we need to do to arrest and reverse this crony capitalist-engineered nightmare...

The Trojan Horse in Our Government

Let me be clear - both American political parties bear the blame for this shameful situation.

It's a totally bipartisan crime.

The fruits of their efforts resulted in the banking and financial services share of corporate profits in America ballooning to more than 40% of all companies' profits by 2006. 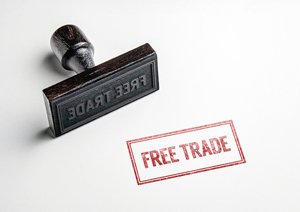 While the leveraging of American borrowers and profiteering of the economy (evidenced by debt-fueled speculative profits outpacing economic growth) was a huge "win" for these people, their domestic profiteering was augmented by an even wider global campaign - under the guise of "free trade."

The series of so-called free trade pacts that resulted was effectively a globalized push to lower regulatory barriers and was engineered to expand American credit into overseas markets.

There were barely any crumbs left here in America; the historical engine of American prosperity - the fuel for a once-expanding and aspiring middle class - had been "globalized."

The ugly irony of free trade and cheap capital is that global competition has ultimately led to overcapacity and reduced profitability.

Bringing back jobs to the United States now would be even more expensive and eat into those corporate profits. All the while, global competition and overcapacity bring down labor costs and margins even in places like China.

So crony capitalists lit the fuse and gave the impetus, but on a functional, day-to-day level, the evisceration of the middle class, the widening income gap, and wealth inequality in the United States aren't the fault of free markets or globalization in its unadulterated form. The problem doesn't spring from the design of our money system, either.

Rather, the problems are caused by how all these systems have been leveraged through - you guessed it - financialization.

Again, on a functional level, fixing these problems is relatively straightforward. But the crony capitalists won't go down without a fight.

I agree with all but the trashing of the Federal Reserve Bank. If you do this the banks will run amok and whatever is left of "middle class" will be wiped out. Economics 101 – (capital flows to where it earns the most rent, business will migrate to where profits are highest and labor will shift to higher paying jobs). After WWII these forces aided America's growth, now after the rest of the world has rebuilt its industry we are feeling its drag. QUESTION – should our laws and financial system spur this development or should they be either neutral or on the side of our citizens? A private citizen of the USA living and working abroad still has to pay taxes to the US. A corporation that relocates its domicile does not have to pay unless it repatriates its cash (FAIR?) This simple adjustment would help our deficit and redirect some investment to our shores.

This article belongs on the front page of The Wallstreet Journal, but we all know that will never happen, simply because it reveals the truth. Newt Gingrich has never recanted going after Bill Clinton to revoke the Glas-Steagall Act, and to sign NAFTA; and the Democrats did not protect the interests of the country by shielding Clinton from impeachment due to his affair with Miss Lewinsky. No, they meekly went along with "The contract with America" Republicans to rob the American public. Those responsible should be named, and not allowed immunity from the truth.

Brilliant analysis of the maladies in our economic system. But this is a complex problem involving, nay requiring, a complete overhaul of the power structure both politically and financially in this country. Reducing these complex problems to a clear and concise message that will win public support is not going to be easy. Look at the liberal resistance to change going on right now and the unspoken, but never-the-less effective support being provided them by supposed conservatives who refuse to change also. And the hysteria in the mass media that accompanies this resistance to change is unprecedented. Draining the swamp is a good start, but can Trump get it done, even started, alone? It's going to take a very clever and complex plan to defeat the forces allied against him, me thinks. Sodypop

Who was it that said " when you are up to your butt in angry aligators, it's hard to remember your objective was to drain the swamp"

Great article, and I agree wholeheartedly.

I have an additional suggestion, replace all the greedy financial advisors with perpetual software to provide equal opportunity for all

I believe that the only way this situation is going to right itself is when the vision for the future is determined by our leaders. It will be a long and arduous task, but if any one can do it our current president can. It's not the cronyism that is causing the situation, it is the vision of where we need to be going. The current administration should start us on that path; however, Rome was not built in a day. Keep your sight on the future progressively.

Shah,
Great suggestions! Please try to get your article to President Trump. I totally agree with you. We need term limits for many reasons, not the least of which is that citizen-patriotic-congressmen should go home after 12 years and get their retirement somewhere else. Thank you,
Connie McVey
Passporter for life

Shah once again hits the nail on the head…a major cause and enabler of this mess was the elimination of The Glass Stegall Act, which had it not been repealed, would have prevented the last housing financial disaster.

I congratulate you for up to the point (brilliant) proposals how to undo the damage to American people and its economy. If only Americans would want to listen to the farewell speech of President Eisenhower who warned about the dangers of private ownership of the Federal Reserve. President Robert Kennedy would most probably not be assassinated and the world would be a better place today. I strongly support your ideas to undo the changes to the American economy that happened in the last 40 or 50 years.