I just got home from the very epicenter of America's legal cannabis sector - Oakland, Calif. I have one heck of a head cold right now... yet I've been bouncing all week.

That's because we just closed out the fourth annual Cannabis Business Summit & Expo, probably the biggest, most important legal weed conclave of the year.

We got the chance to talk to some of the giants of cannabis - former president of Mexico and cannabis bull Vicente Fox, for one, and Taylor West of the National Cannabis Industry Association, to name another...

Interestingly enough, two of the most significant (read: profitable) developments I've uncovered for investors weren't all that flashy.

They're interconnected issues that might not blow your hair back at first, but they're pointing to one of the most unusual "pot stock" recommendations I've ever made...

For Investors, These Details Matter

So, here's the really "boring" thing I have to tell you about today. 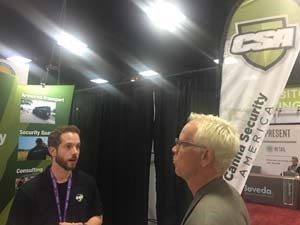 I'm talking about government compliance and product/service/results-based tracking. These are urgent needs in the cannabis sector right now, and it happens to be exactly why - right alongside all the growers and dispensaries that you'd expect - so many software companies were at this expo.

You see, most pot entrepreneurs start out with little experience in complying with state and local government rules or tracking their products. Plus, when they're just starting out, they don't have the staff to handle this kind of "boring" bureaucratic stuff.

And that boring bureaucratic stuff is critically important in such a brand-new, relatively controversial industry that was, let's face it, almost totally illegal just five years ago.

These businesses need to have all t's crossed and all i's dotted, lest they face crippling, potentially business-ending sanctions.

They need help - and the right software can fill those gaps.

Anyone who has been a leader in Mexico, where the government has a long history of being corrupt, has no credibility! Under Fox, the drug cartel flourished. Vicente should have no say as he is as corrupt as any politician that has come out of Mexico!

Here we find quality information for the thinking person that leads to decisive decision-making.

The method of tracking the product from growth to consumption has already been patented.

Maybe A method for product tracking has been patented, but certainly not THE method. As if there were only one way to do it..

Good idea… Has medicinal use.

I want to learn as much as possible about this industry

Im going to invest as quickly as i can.

I'm going to invest what I can. I'm tired of living hand to mouth.

I want to start learning. It great medical cannabis .being looking for something like this great information.

Am excited to learn more about this!

I"m excited for the opportunity and happy to invest.

Where do you begin if your new to investing? Where do you purchase these stocks how long do you hold the stock?

I would like to know what the least amount I can invest and still make a reasonable return. And can I re-invest my returns.?

I'm really excited to learn all I can about this. I have several family members that would be interested also. Some already receive medical marijuana. Can't wait.