(Kitco News) – There is keener anxiety and risk aversion in the marketplace Wednesday after U.S. President Donald Trump warned North Korea there would be "fire and fury like the world has never seen" if North Korea keeps threatening the U.S.

North Korea, meantime, responded by saying it may fire a missile toward the U.S. territory of Guam. North Korea had recently threatened to use its nuclear weapons against the U.S. after the United Nations slapped more sanctions on the rogue nation. Some U.S. lawmakers have criticized Trump for his remarks Tuesday on North Korea, saying he should tone down his rhetoric. 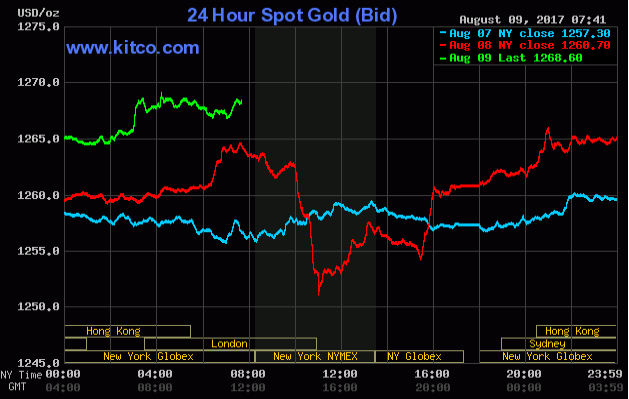 The U.S. dollar index is slightly weaker in early U.S. trading Wednesday. The index has been trending lower all year long and the bears have the strong near-term technical advantage. However, more price strength in the greenback this week would begin to suggest a market bottom is in place.

Meantime, Nymex crude oil futures are slightly up and trading just below $50.00 a barrel. OPEC members are meeting this week in Abu Dhabi. That meeting will be closely monitored by energy market watchers.

There was another apparent terror attack in France Wednesday. Several were injured when a car rammed several French soldiers.