China has become the global leader in solar energy, and the country has already crushed its own ambitious 2020 production goals in the process...

Now, analysts are projecting solar production to grow an astounding 700% in less than 20 years.

And there's one China solar stock you can buy today to ride this growth to once-in-a-lifetime profits...

China Is Dominating the World in Solar, and It's Not Even Close

It is undeniable that China has grabbed the reins as the world's leading solar energy producer.

The IEA confirms that over 60% of the world's solar cells are made in China. Check out just how drastically China's PV production has grown over the last decade in the chart to the right.

As the world doubles its renewable energy production by 2030, according to the IRENA, China will still be leading the way.

While China has already seen massive solar growth, the potential gains for Chinese solar stocks are just getting started.

Why China's Solar Industry Growth Will Continue to Skyrocket

Between China's insatiable demand for energy and solar's falling costs, China's solar production will continue to dominate the rest of the world's.

Wood Mackenzie forecasts China's solar power generation will grow by over 700% by 2035.

That level of energy demand means China is emitting a record amount of carbon into the atmosphere. In 2015, China emitted nearly 30% of the entire world's carbon output. And that's caused serious health issues in major Chinese cities.

But solar energy is a solution to China's pollution problems, and it's potentially even cheaper than coal, China's favored source of power.

Energy from the sun is unlimited, free, and clean. That gives it substantial advantages over coal, gas, and oil, which can run out, pollute the environment, and can rise in cost depending on supply at a given moment.

But solar energy has been held back for years because the technology to convert sunlight into power has been too expensive and inefficient.

That's not the case anymore...

Solar power's costs are now just 1/150th of what they were in the 1970s, and they're even down 10% just in the last year. In fact, Money Morning Global Energy Strategist Dr. Kent Moors confirms solar energy has finally achieved grid parity in many parts of the world. 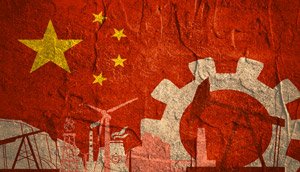 But between pollution and rising coal prices in China, solar energy has a clear competitive edge. And as the cleaner, cheaper, and unlimited energy supply from the sun pushes solar past coal as China's energy source of choice, the growth potential for solar is incredible.

Wood Mackenzie forecasts China's solar power generation will grow by over 700% by 2035.

The profit potential is staggering too. Worldwide, the solar industry is sitting on a $48 trillion windfall right now, and China is currently the heart of it. That means investors who act now are still getting in early on this global energy revolution led by China.

But investors can't afford to wait any longer. That's why we've done the research and found the best of the Chinese solar stocks to own to capitalize on solar energy's incredible potential...

What is the symbol of the One China Solar Stock To Own?