They call it "weed," and in its most primitive, natural state, you can find scraggly little cannabis plants growing wild in some pretty dingy, inhospitable soil.

But commercial medicinal- and recreational-grade cannabis - the "good stuff" - is a different story altogether...

This is seriously labor- and tech-intensive stuff. It's also the specialty of the company I'm going to show you today.

It's one of the fundamental picks in my Nova-X Report's Roadmap to Marijuana Millions model portfolio.

What's more, in my view, it's absolutely essential for tapping the profit power in legal cannabis and keeping your risk low...

When It Comes to Weed, Soil Is Very "Last Year"

Pot plants must - repeat: must - be exposed to light for 12 hours a day - and kept in darkness for just as long.

Kayvan Khalatbari and Nick Hice, co-owners of Denver Relief, a medicinal-marijuana dispensary, told the Denver Post that "the best place to grow marijuana is in a room in the basement with a locked door so light doesn't inadvertently get in when the plants are 'sleeping.'" 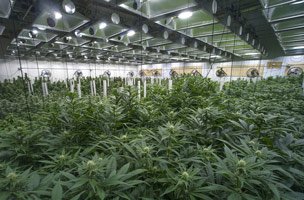 That's fine if you're a "grow-your-own" private toker. If you spoil a "harvest" or two, you won't go broke or out of business.

Not so for the professional, large-scale cultivator. He or she has precious little room for error. As they say in the trade, the "plants have to flower."

To protect their investment, growers turn to state-of-the-art greenhouses containing high-tech devices and monitors such as hygrometers, which see to it that humidity levels never get above 50%, and CO2 tanks, which add the carbon dioxide that plants breathe in to the indoor air.

Another way that the major growers control cultivation is through "hydroponics," which is a method of growing plants in mineral- and nutrient-laced water, without soil.

According to Manifest Minds LLC, the hydroponically grown plants will make up a $24 billion market by 2018. All this barely scratches the surface of marijuana technology. Growers also need high-powered horticultural lightbulbs, custom regulated fans, valves and pumps, nutrient and mineral supplements, plus specialized "grow tents."

With growers so dependent upon technology to operate this soon-to-be $200 billion industry, it's no surprise that Silicon Valley is pouring money into it: According to Cleantech Group, venture capitalists sank $976 million into agriculture startups.

A 2015 report by MarketsandMarkets estimates that the market for "smart" greenhouses will reach $1.2 billion by 2020.

Special Report: Cannabis Is the Gold Rush of the 21st Century - 30 Stocks to Invest in Now. Details here...
This is the "growth from 'growth'" kind of landscape that firms like the one I'm going to show you finds itself in.

You see, I believe that $1.2 billion target is a tiny fraction of the potential profits to be had from this niche, so I'm setting us up for maximum upside (and, as you'll see, absolute minimum downside risk) from this trend...

How can I purchase some of this stock

Maybe SMG is a way to begin the pot play?

How can I purchase stock?

How can I purchase stock?

How do I go about purchasing stocks?

Thanks, very outstanding, welcome to go ahead,nice easy step by step we will reach the best development, useful all the poeples around world.hope all u happy to live.thanks