Ronnie Moas, the co-founder of Standpoint Research, made a bold prediction on July 5 that Bitcoin would trade for $5,000 by 2018. Now he's made an even bolder forecast for 2018, and today, he's telling us all about it... 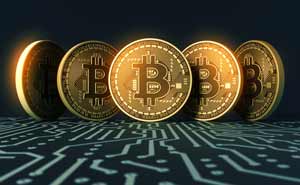 And for Money Morning readers, we had to make sure you know where he sees Bitcoin prices heading next.

Speaking with Money Morning Economist Garrett Baldwin, Moas covered a wide range of Bitcoin topics, including whether it's in a bubble, his reaction to criticism of Bitcoin by big-name investors and central banks, and what he sees down the road for Bitcoin...

Shortly after the announcement, Baldwin caught up with Moas while he was visiting New York to discuss his recent price target and why he thinks that so many critics are wrong about Bitcoin.

Money Morning (MM): There has been a lot of criticism of Bitcoin, people saying that it's in a bubble. What is your reaction to statements by Jamie Dimon, Warren Buffett, and others?

Ronnie Moas (RM): Anyone who is bearish on Bitcoin either doesn't understand it, or they haven't done enough research.

Look at Warren Buffett, who famously said that he doesn't understand technology. He missed out on Amazon.com Inc. (Nasdaq: AMZN). Buffett is heavily invested in the stock market, where you're far more likely to be a victim to scams or see bubbles.

Whether it's Jamie Dimon, Buffett, or Prince Al-Waleed bin Tala, they don't know what is going on, or they are part of the crowd of people who once said that people wouldn't buy cell phones.

That they wouldn't surf the Internet. That people wouldn't invest in tractors.

There is no going back. [Trying to go back and replace] crypto with the traditional banking system right now would be like asking me to replace my computer with a typewriter.

MM: What about central bankers that say that there isn't anything backing Bitcoin, that it isn't centralized?

RM: Anyone who asks me about what backs Bitcoin, I ask them, "Well, what is backing the U.S. dollar?" Because the U.S. dollar has fallen by 50% since I was in high school.

It's not easy to have confidence in an asset like the dollar that has lost as much value as it has.

MM: What is the one factor that has you more bullish than your forecast from the summer?

RM: This is the biggest supply/demand imbalance of my lifetime. We're going to have 200 million people around the world trying to purchase a small amount of Bitcoin that is available.

The circulation will be capped at around 21 million, from 16 million coins today. You see thousands of people signing up each day to create wallets.

The demand is incredible, and scarcity plays a big part of this price increase.

Right now, there is about $200 trillion in assets. If we see just 2% of this money go into crypto, that will create a $2 trillion valuation, which is about ten times what it is today.

MM: What do you see as the biggest downside threat for Bitcoin?

RM: Well, if you look far enough down the road, there is a threat that another cryptocurrency - and of the 1,000 cryptocurrencies out there - replaces Bitcoin.

It's just not going to happen.

The Bottom Line on Ronnie Moas' Bitcoin Predictions:  Ronnie Moas is one of the most bullish analysts on Bitcoin. He projects that Bitcoin will surge to $50,000 by 2027. As a result, he anticipates that Bitcoin's ecosystem will surpass the market capitalization of Apple Inc. (Nasdaq: AAPL) in the future. Moas argues that Bitcoin is undervalued by about 75%.

how do u buy/trade Bitcoin?

Hi Richard. I would have a look a look at this link as I found it useful when I bought some. https://www.youtube.com/watch?time_continue=188&v=kCyePPGdK4s

there are various exchanges such as coinbase ( one of the easiest to use), bittrex, krakken. Then there are online wallets to simply store such as electrum. Cold storage devices such as nano can be used to store your coins as well and these systems are like a zip drive which store your coins off line.

I bought some Bitcoin and Ethereum through Coinbase. I have a Nano S Wallet. How do I transfer my coins from Coinbase to my Nano S Wallet?

I have a very small amount deposited in Coinbase for 3 Cryptocurrencies.
I realize this is a vault to hold them. So, from there, how and where do I invest them to hopefully start to earn money?

deborah just keep buying and hold the coins in your vault. That IS investing in bitcoin!

How do you buy etheruem? Can you buy it through an ETF or MF?
Help please!!!!!

I am interested but still on the sidelines because I just don't understand enough about how this whole crypo currencies work.