With an abridged trading week last week, the price of silver was unable to gain any significant traction, climbing just 0.6% for the week. Despite the stagnant performance last week, I still see silver prices climbing significantly by the end of the year…

The only real possible driver was the weakening U.S. dollar, yet silver's modest gains were not commensurate with that opportunity.

Some encouraging gains came mid-week, as market observers focused on the Federal Reserve. It seems their interpretation of the FOMC's concerns over "persistently weak inflation data" potentially leading to lower inflation expectations for a longer period weighed on the dollar and boosted silver prices.

To be sure, seasonal trends and the dollar are likely to be the biggest near-term drivers for this metal. And despite the dollar's recent sell-off, I think it may be a little early to call the end of its recent counter-trend rally…

As silver opened for trading on Tuesday, Nov. 21, the precious metal changed hands at $16.90.  The DXY was pretty flat, though, moving from just above 94 in morning trading to just below that level for the remainder of the day. That seems to have been enough to help push silver higher. By 10:00 a.m., it had popped to $17, before it retreated back to $16.94 by the 5:00 p.m. close.

Thursday's silver price action was pretty muted, as was the dollar's. Silver opened at $17.08, and after quiet Thanksgiving trading, it closed just $0.01 lower, at $17.07.

Here's tracking the DXY's movements over the past five trading days. 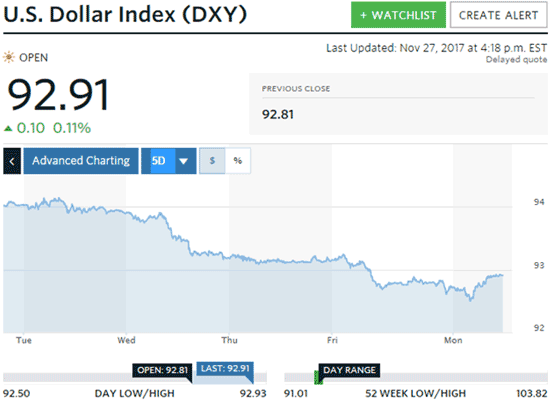 Now that we've taken a look back at last week's silver price movement, here's my price target for the end of 2017…

My Bullish Silver Price Target for the End of December 2017

Every time you write your market reports they are basically correct and your previews not bad at all. What irritates me, however, is that you continue to overlook(a ostrich policy to put your head in the sand) that criminal elements aré manipulating the markets, JP Morgan, Goldman Sachs etc. You and your fellow USAers don't do anything about so you better don't make any more market predictions. Sorry to say.