Now that prices are racing toward $10,000, we're looking at where Bitcoin prices are headed next.

Standpoint Research founder Ronnie Moas, one of the most respected analysts in the industry, projects the price of Bitcoin will reach $14,000 in 2018. 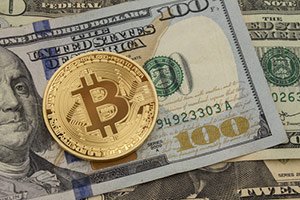 Today, we're going to provide Money Morning readers with all the details on five major catalysts that could push the cryptocurrency to $14,000.

And the first one is Bitcoin being legitimized as a global commodity...

Catalyst No. 5 for Bitcoin Prices to Climb: CME Bitcoin Futures

By the end of the year, the world's leading commodity derivatives exchange is expected to allow trading of Bitcoin futures.

And the addition of Bitcoin futures by the Chicago Mercantile Exchange (CME) does two critical things for the cryptocurrency space.

First, CME futures legitimize Bitcoin as a global commodity that will trade alongside energy and currency derivatives.

It's only a matter of time before a Wall Street bank jumps into the pool and trades Bitcoin.

Billionaire Mike Novogratz has predicted that the "institutionalization" of Bitcoin is pending.

Rumors continue to swirl that a firm like Goldman Sachs Group Inc. (NYSE: GS) may soon be the first to lead this transition.

Goldman - which makes a significant amount of its money on trading - has experienced a 40% decline in fixed income in the second quarter, leading some journalists to speculate that Goldman would look to exploit growing interest in Bitcoin trading.

We will likely see a top-tier U.S. bank initiate coverage of Bitcoin in 2018 and maintain a trading desk similar to what exists for other commodities.

If Goldman Sachs becomes that bank, it is likely that many other banks will follow suit.

Part of the reason for the skyrocketing prices has been due to the stunning supply-and-demand metrics.

As Moas explained to me in an interview, Bitcoin represents the largest supply-and-demand imbalance that he has witnessed in his lifetime.

The crypto exchange Coinbase announced that it had 100,000 new accounts added in 24 hours after CME Group announced plans for Bitcoin futures in early November.

With Bitcoin hovering at all-time levels and more aggressive price forecasts emerging each day, more investors may take the plunge in hoping to capture the upside.

"Fear of missing out" - a.k.a. "FOMO" - is a real element of behavioral economics, and it will continue to drive investors into assets like Bitcoin in the future.

Catalyst No. 2 for Bitcoin Prices to Climb: Fiat Currencies Erode Away

Inflation levels around the globe have pummeled the value of local currencies.

In Venezuela, a popular destination for Bitcoin mining, the nation's bolivar has lost 96% of its value against the U.S. dollar - this year alone.

In Zimbabwe, citizens are buying Bitcoin at an inflated level of roughly $15,000 to preserve any value of their assets.

In fact, Zimbabwe citizens are defying their new government leaders by purchasing Bitcoin at a time that it's ruled to be illegal. Some advocates argue that Bitcoin is a necessity in a country where the economy is collapsing.

Fading confidence in central banking schemes would continue to accelerate the popularity of cryptocurrencies.

And the next catalyst could be the biggest in sending Bitcoin prices above $14,000...

I need to know more on Bitcoin