Between Bitcoin prices surging to nearly $17,000 and oil prices reaching yearly highs, it's no wonder gold prices have fallen this week. And now the Federal Reserve is set to hike interest rates this week...

According to the CME Group, the probability of a Fed rate hike on Dec. 13 is currently at 90.2%.  That's powering the U.S. Dollar Index (DXY), which has gained nearly 100 basis points in the past week.

These are all formidable headwinds for the gold price.

But there's light at the end of this tunnel, and the tunnel may be shorter than you think...

Why the Price of Gold Has Fallen 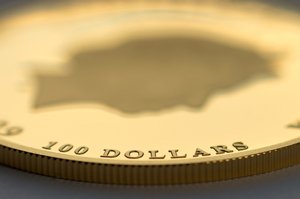 Before we show you how the Fed's rate hike decision will move gold prices, here's a look at last week's gold price action.

Gold's start to the last trading week was innocuous. In late Sunday evening trading, gold gave up about $5, then opened a few dollars lower, at $1,273, on Monday, Dec. 4. Slight DXY weakness helped gold as the trading day wore on, and the metal clawed back to close at $1,276.

Wednesday would bring similar action as Tuesday, only milder. Gold opened at $1,266, then ground slowly lower as the DXY peaked at 93.63 around midday. Although the DXY reversed a little, to 93.55 by 5:00 p.m., gold selling pressure continued, and the metal closed at $1,263.

Here's the U.S. Dollar Index action of the past week. 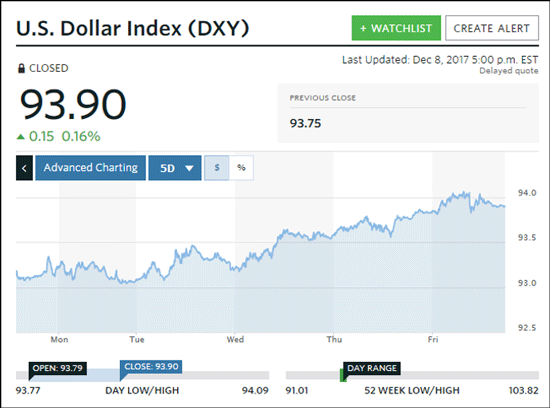 On Thursday, gold selling intensified, as technical traders saw gold prices below $1,260 as a signal to jump ship.

Unless we see any real further weakness in the days ahead - and we may - Thursday may turn out to have been gold's final sell-off capitulation. At least Friday's gold price action didn't pull the metal still lower.

And that was with the DXY, which rose further, spending the early morning hours well above 94. The DXY dropped back to 93.9 around 9:00 a.m., climbing back above 94 around 11:00 a.m., then retreated to 93.9 into late afternoon. Through this, gold opened at $1,248, and with a little movement both up and down, it still closed at that same price.

Now, let's look at how gold will respond to a new interest rate hike, including our latest gold price prediction...

What a Rate Hike Will Do to Gold Prices