The Trump White House is taking a page right out of President Reagan's playbook. When Reagan took office in January 1981, he sought to rebuild a military depleted by years of war and tough congressional budgets.

Trump took office last January after campaigning on a defense buildup from a budget of around $580 billion. He said he wanted to beef up the military after prolonged battles in the Middle East and annual defense budget fights on Capitol Hill that limited weapons spending.

That's why Trump called for a fiscal 2018 defense budget that is 10% larger than the year before, making it the biggest increase since the Reagan years.

Make no mistake, this gives us a "target-rich" opportunity for the new year. After all, Trump wants more airplanes, tanks, and troops, as well as technology for missile defense and a wide range of other platforms.

And today, I'm going to reveal the defense trends I see for 2018 and show you how to play them with a market-crushing investment...

Defense Investing Is in My Blood

When it comes to analyzing defense trends, I do have a bit of an insider's advantage. See, I grew up in a military high-tech household and have been following the industry for some 45 years now.

Not only that, but my dad was the award-winning senior military editor for Aviation Week and Space Technology magazine, the bible of the industry. That's how I ended up with a front-row seat to the Reagan defense investments of the 1980s.

Trump is far from alone in his defense ambitions. Last month, the U.S. Senate passed a 2018 military spending bill worth $700 billion, a figure that was actually more than what Trump had sought. 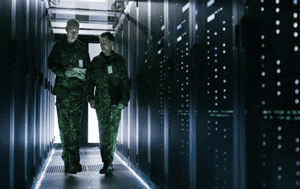 (Note: At the deadline, the final figure still was not known because the White House and Congress had agreed to a stop-gap spending measure designed to avert a government shutdown before passage of the entire U.S. fiscal budget.)

Trump wants to upgrade the military from stem to stern with more troops, tanks, ships, and aircraft. Bear in mind that we expect to this to be a long-term trend as well. Trump wants to increase the defense budget another $683 billion over the next 10 years.

But the year ahead should be particularly good for investors because of the trends embedded in the White House's defense vision.

Hi, does the KTOS make the Mach 7 Cannon? Thanks, Rick

Would like more information on how to make money from shares