Litecoin prices dropped 5% today despite the news that transactions for the cryptocurrency are steadily increasing.

Litecoin creator Charlie Lee took to Twitter Inc. (NYSE: TWTR) today to share a chart of Litecoin transactions. From the chart, transactions have appeared to increase from roughly 20,000 on Oct. 8, 2017, to over 160,000 at one point in late December. 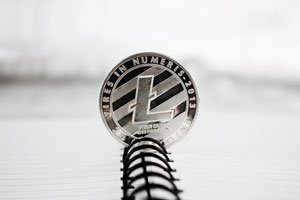 Once in the top five in cryptocurrencies by market cap, Litecoin has slipped to eighth.

In Bitcoin news, the price topped $15,000. The day featured conflicting outlooks for Bitcoin from two prominent voices in the financial space.

First, former Clinton advisor and tech investor Glenn Hutchins said that Bitcoin's price is a major distraction for investors. Hutchins argued that the better opportunities in the future can be found in IT firms that are developing in the blockchain space.

"They should be talking about the companies. Bitcoin could turn out to be the winner; it could also turn out to be Betamax," Hutchins said in an interview with The Financial Times.

Meanwhile, the CEO and co-founder of cryptocurrency exchange BTCC, Bobby Lee, predicted that Bitcoin's price will surge again over the next two years.

"Every four years Bitcoin the block reward goes down by half, we think there is a natural impetus for that to be more restriction and less supply. With less supply, the price seems to go up, especially with more investment in this area," said Lee.

On Thursday, the market capitalization of the global cryptocurrency sector surged to $759.97 billion.

Ethereum Tops $1,000 as It Battles with Ripple

On Thursday, Ethereum pushed above the $1,000 level and is back within striking distance of its rival. The company announced that it will be increasing the scalability of its network and bolstering new blockchain programs in the year ahead.

Must Read: Should I Buy Bitcoin or Gold?

Despite Ethereum's gains, it was still not able to surpass Ripple, which added another 5.8% on the day.

Ripple has been on an incredible run over the last month thanks to the increased interest in the firm's underlying technology from Japanese and South Korean financial institutions.

In addition, a new hedge fund denominated entirely in Ripple is a positive trend for the cryptocurrency.

If you haven't heard about Tron, it needs to be on your radar...

Tron is cryptocurrency for an open-source platform that connects audiences to content generators.

Its founder, Justin Sun, helped push the price higher after he announced that the company was on the verge of forming a few strategic partnerships. Sun is a protégé of Jack Ma, the founder of Alibaba Group Holding Ltd. (NYSE: BABA), and some are speculating that the Chinese e-commerce giant partners with Tron later this year.

Siacoin continues to be one of the top-performing cryptocurrencies over the last few months. Though the price of the storage company's coin is sitting at just under $0.04, confidence in the network has spurred a lot of investor interest.

The price surged another 28% over the last 24 hours.

Analysts from Hacked and Global Coin Report have boosted the cryptocurrency's reputation by branding it a possible alternative investment to Bitcoin and Ripple.

Siacoin aims to offer a massive network that incentivizes users to store someone else's data on their computers and servers through a rent process.