Today, it's already 200 basis points, or more than 2%, lower. The dollar has now clearly broken down like I've been saying we should expect.

That, combined with overly negative sentiment, a strong seasonal bias, and a return to a bull market, have silver trending higher. In the immediate term, silver prices today are down 1.4%, to $17.20, but don't expect this dip to last. However, silver prices are still up roughly 9.2% since mid-December.

If the dollar continues to weaken, expect that to help drive even further gains for this underappreciated and dramatically undervalued metal. 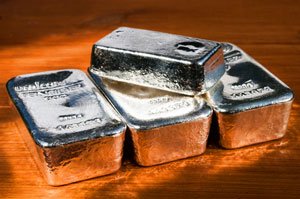 I think 2018 could see silver do even better than the current king of cryptos, Bitcoin.

Silver actually had a flattish week, as the DXY managed to consolidate high around 92.5. On Tuesday, Jan. 9, silver opened at $16.99 then trended downward on balance through the day.  That took the metal steadily lower to finally close at $16.93.

Here's the DXY's action of the past week. 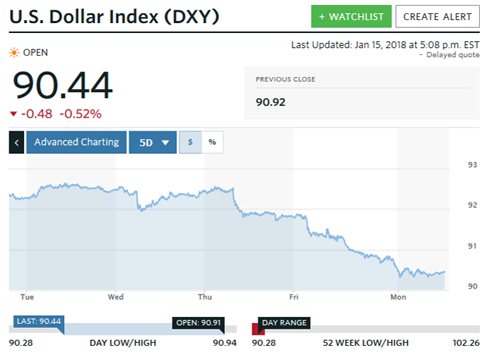 On Monday, Jan. 15, silver rallied further as selling pushed the dollar lower. The DXY was at 90.43 by 8:00 a.m., and silver buying had pushed the metal to $17.33, where it closed out the day as the dollar had remained basically flat.

Now that we've examined how silver prices have been trending, here's my bullish outlook for the metal in 2018…

Here's How High Silver Prices Are Headed in 2018