And for a good reason - one that transcends China's repeated calls for diplomatic talks in a time of relative tranquility between Seoul and Pyongyang. 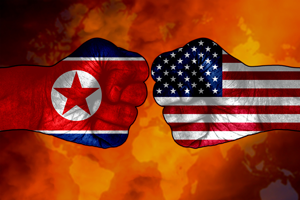 "Only through dialogue, equally addressing the reasonable concerns of all parties, can a way to an effective and peaceful resolution be found," Lu added, in response to news that America was still considering a military strike on the Hermit Kingdom.

But "equally addressing the reasonable concerns of all parties" comes with an inexcusable catch.

Diplomacy Without Conditions for North Korea Is Not an Option

The West doesn't want a peaceful resolution with North Korea at this point, because right now, North Korea still has nuclear weapons.

And the flat-out truth of the matter is it shouldn't.

U.S. Secretary of State Rex Tillerson said as much at yesterday's meeting, when he pushed for greater economic pressure on the regime.

"We must increase the costs of the regime's behavior to the point that North Korea comes to the table for credible negotiations," he said, according to The Washington Post today. "The object of negotiations, if and when we get there, is the complete, verifiable and irreversible denuclearization of North Korea."

To back off from pressuring Kim Jong Un now in order to "keep the peace" - as China suggests - would be akin to telling him, "If you stop making more weapons and knock off the threats, you can keep what you have."

That's why the United States and Canada cohosted a 20-nation meeting in Vancouver yesterday to consult on how best to increase sanctions on North Korea. China was not invited.

It's not that the West wants a preemptive strike. Quite the opposite.

Basically, this means that the ball's in North Korea's court when it comes to diplomacy, but the United States can still maintain the safety of its people in the interim.

Here's one of our favorite plays to do just that...

Take a look at the companies PPA holds...

And Northrop Grumman Corp. (NYSE: NOC) has a wide spectrum of operations, which covers everything from advanced sensors, to missile defense, to cybersecurity.

With the secrets you'll find in this book, we've produced 89 chances to double, triple, and even quadruple your money in the past two-and-a-half years - 42 chances this year alone!

You'll also learn how to play market volatility, meaning that no matter what North Korea does to the markets, you can still find money-doubling opportunities.