The pet industry is currently a $69 billion market, according to CNBC, and investors looking for a way to profit may soon have their chance through the BarkBox IPO.

BarkBox sends a curated box of bones, toys, treats, and accessories to subscribers each month. 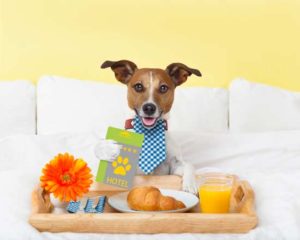 The boxes have fun monthly themes like "Chewrassic Bark," with items that include treats named "Jurassic Pork," and a toy dinosaur.

But that growth is increasingly concentrated in web sales. U.S. consumers are visiting subscription service websites more than ever before.

As of April 2017, that number skyrocketed over 800%, to 37 million monthly visitors, according to Forbes.

Now investors are getting a chance to profit from this trend when BarkBox goes public.

Today, we wanted to offer Money Morning readers a detailed guide on BarkBox, which includes its history, valuation, and how to buy BarkBox stock.

Most importantly, we'll also answer the question of whether you should buy BarkBox stock when it goes public.

Let's start with how this innovative subscription service was formed…

Meeker is the co-founder of the online social networking service Meetup, and Werdelin is the founder of the New York City-based venture development firm Prehype.

Strife worked at Uber from January 2011 to December 2011, according to her LinkedIn profile.

And the inspiration for the dog subscription service came from Meeker's 150-pound Great Dane.

The CEO had a difficult time finding retailers in New York City that sold products tailored for dogs of all sizes.

He saw a problem and decided to fix it himself…

But despite the revenue growth, BarkBox could become an acquisition target thanks to its modest valuation…

How Much Is BarkBox Worth?

Compiling data from comparable public companies, Forbes projects BarkBox is worth between $150 million and $200 million.

Meeker told CNBC that he sees Amazon.com Inc. (Nadsaq: AMZN) as a competitor, but he also sees them as a potential partner.

Because BarkBox's CEO will never beat the $619 billion e-commerce giant, he might prefer an acquisition by AMZN.

Bark is only reaching 500,000 subscribers right now, while being acquired by Amazon would give Meeker access to its 300 million users.

Amazon has $24.31 billion in total cash on its balance sheet, so it could buy the pet subscription service tomorrow if it wanted too.

Outside of Amazon, Target Corp. (NYSE: TGT) could be a potential buyer. The retailer partnered with BarkBox in August 2017 and currently sells its products in stores and on its website.

But with Target being a potential buyout candidate of its own, it may not be in the market for new acquisitions.

And if BarkBox isn't acquired by another company, it could IPO as early as June….

When Is the BarkBox IPO?

That would place the BarkBox IPO date as soon as June 2018.

As more details emerge about when BarkBox plans to go public, we will keep our readers up to date with our free Profit Alerts service.

But if the company goes public, here's how to buy BarkBox stock…

How Do I Buy BarkBox Stock?

The IPO offering price will only be offered to hedge funds, big banks, large institutions, and well-connected investors. It will also be cheaper than what retail investors will have to pay.

Unfortunately, retail investors can only purchase BarkBox stock through a brokerage firm on the day of the IPO and won't have access to the offering price.

Editor's Note: For more information on finding the right brokerage for you, click here.

This leads us to the most important question investors will ask themselves when the BarkBox IPO date is announced: "Should I buy BarkBox stock?"

And Money Morning Director of Technology & Venture Capital Research Michael A. Robinson has a very clear answer for potential investors.

Robinson has been a giant in tech investing for more than 30 years.

His privileged access to technology-pioneering CEOs… prize-wining scientists… and high-profile industry insiders has allowed him to consistently give investors huge gains on remarkable breakthroughs.

Those who listened to his recommendations on rare earth metals, for example, would've seen cumulative gains of 990% in just 16 months.

Because of his winning track record, I had to share his advice on whether Money Morning readers should buy BarkBox stock…

Should I Buy BarkBox Stock?