Gold prices in 2018 are already gaining thanks to the "January Effect" I told you about last week, and the government shutdown this week won't slow them down.

The yellow metal peaked at $1,343 early last week (Tuesday, Jan. 16). That marked a four-month high as the gold traders realized central banks around the world were likely to start "catching up," which means raising rates as their economies begin improving.

Ongoing weakness in the U.S. dollar has also supported higher gold prices, and I don't see that trend ending anytime soon. Rather, I think an even lower dollar lies ahead and should help fuel further gains for the precious metal.

And a recent Commitment of Traders report shows money managers have been adding to their long gold futures positions as they follow its price higher.

That's just one more reason my 2018 gold price target is within reach. I'll show you that prediction in just a minute, but first, I want to show you how gold prices moved last week…

After a strong start last week, with gold hitting a high of $1,343, the metal seems to have moved, at least temporarily, into consolidation mode.

On Monday (Jan. 15), gold opened at $1,342 as the U.S. Dollar Index (DXY) fell below previous support levels to fresh multi-year lows. The DXY had been working its way lower already on Friday, but Monday brought fresh lows that sent commodities soaring. The DXY dropped to 90.43 by 8:00 a.m. and meandered around that level through the day. After a strong open, gold gave back $2 to close at $1,340. 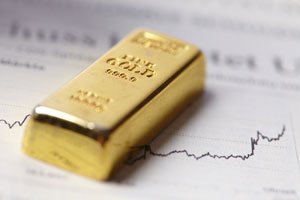 But the dollar saw the most action on Thursday (Jan. 18). Check out how steep the DXY fell… 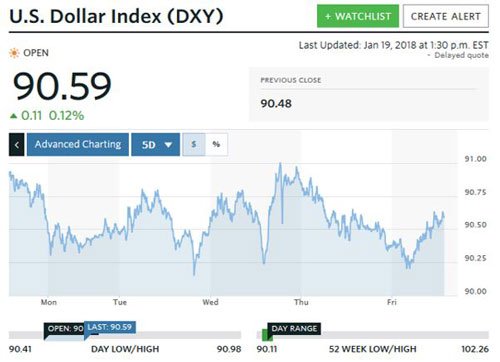 Despite the DXY's volatile week, it's trending down over the long term. The DXY is down over 10% since this point last year.

And that means last week's gold price high will be the first of many this year.

Here's where I see gold prices reaching in the next month and by the end of the year, even with the government shutting down…

Gold Prices in 2018 Can't Be Slowed by a Government Shutdown