In a government shutdown, Congress gets paid for the chaos it creates.

And another full-on shutdown is all but guaranteed at this point.

In just one week (Feb. 8), senators and House members will convene once again to try to hammer out a funding bill after failing to do so on Jan. 19. But not a single politician has budged in the larger congressional dispute over immigration and spending levels.

And while it's possible the shutdown next week could hurt legislators' future reelection campaigns, they won't miss a dime of pay - unlike most government workers.

Unlike other federal employees, senators and House members' salaries are literally written into and guaranteed by the U.S. Constitution.

Article 1, Section 6 specifies, "The Senators and Representatives shall receive a Compensation for their Services, to be ascertained by Law, and paid out of the Treasury of the United States." 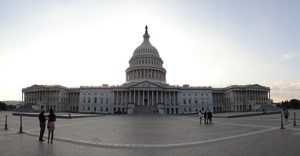 On top of that, the 27th Amendment actually prevents Congress members from changing their own salaries between elections.

This means that legislators can't give themselves raises while in office, but it also means that they can't halt their pay, either.

Conversely, the Constitution does not protect the salaries of congressional staff members or any other federal employees.

Stay One Step Ahead of the Politicians: Get real-time updates on how Congress is affecting your money with our free Profit Alerts.

In fact, while Congress is paid not to work, some federal employees aren't paid at all, while others are forced to work for delayed pay.

Now, there are some folks on the Hill well aware of this inequity.

For instance, some members of Congress donated or at least vowed to donate their salaries to various causes during last month's three-day cessation on Capitol Hill.

Rep. Scott Taylor (R-VA) likewise promised his pay to a non-profit in his district that helps veterans overcome homelessness and substance abuse.

Other members of Congress, however, think they should be paid more.

And sadly, there's not been so much as a peep about congressional salary donations ahead of next week's near-guaranteed stoppage.

It seems, however, that members of Congress should seriously consider donating their salaries to the very staff members their loggerheads put out of work.

Or better yet: stop shutting down the government in the first place.

You don't need any special training... any insider knowledge of the markets... or any exceptional skills.