It sounds like a scene from a science fiction film.

A character stands on the street corner, rays of sun bouncing off futuristic buildings, as he watches cars race down the street. 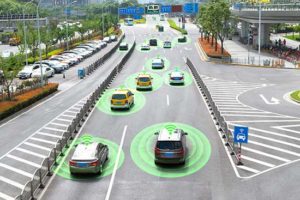 The man marvels at the sleek design of the cars whizzing past. They seamlessly weave across lanes, almost like a ballet.

When the traffic light turns red, the man looks to one of the cars.

His eyes bulge when he realizes something incredible.

In the driver seats of these vehicles sits... no one.

The light turns green, and the driverless vehicles all whiz by him once again.

All around him, nothing seems out of the ordinary.

This is a morning in America... in the next seven years.

The autonomous vehicle revolution is accelerating at an incredible pace.

And the upcoming date of April 2, 2018, marks a critical milestone that every investor needs to know about if they want to cash in on this revolutionary trend...

It's time to mark your calendar.

On April 2, the state of California will offer the next major catalyst to the driverless car industry.

Up until this date, companies have been required to have a human driver in the autonomous vehicle to take control in the event of an emergency.

Now, that doesn't mean there won't be any human intervention. The California DMV still requires a remote operator to take over the vehicle in the event of an emergency.

But this is the first step of taking the "training wheels" off this technology and allowing manufacturers to showcase the steep advancements in their vehicles.

This is a big deal for autonomous developers at Waymo, a subsidiary of Alphabet Inc. (Nasdaq: GOOGL), and Cruise, a part of General Motors Co. (NYSE: GM).

In fact, General Motors believes that at the current rate of innovation, it could have its vehicles out on the road as part of a pilot program as soon as 2019.

That's just a year away.

To think of how quickly this industry has emerged from just a few years ago is an open display of the power of innovation and technological disruption.

It also proves that if you want any shot of making money, you need to move quickly and stay well ahead of the curve.

The investment potential in this market is unlike anything I've seen in a long time...

Its now April 6. What is that event to Mark Your Calendar: April 2 Will Change the Auto Industry Forever?