Self-driving cars are still coming, but they're not where you want your money right now.

Autonomous vehicles are getting a bad rap in the wake of the fatal accident involving an autonomous Uber vehicle and a pedestrian on March 19. 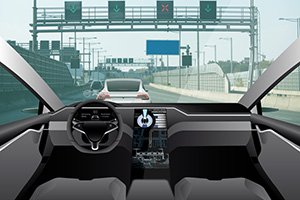 Four days after the incident - on March 23 - The New York Times reported that Uber's self-driving car project hadn't been living up to expectations for months...

"The cars were having trouble driving through construction zones and next to tall vehicles, like big rigs," NYT stated.

This was with a human "safety driver" already onboard.

While Lyft has remained tight-lipped about its autonomous vehicle venture in the wake of the Arizona Uber accident, the FAQ on its website states that the "pilots" are "constantly monitoring the vehicle systems and surrounding environment, and are ready to manually take control of the vehicle if an unexpected situation arises."

Which is to say, Lyft is using the same method that caused a fatality just last week.

We've found a tiny tech firm, on the other hand, that is making real, measurable progress in vehicle safety and could unleash a $2 billion cash grab as soon as this Saturday...

But first, here's how we know these "safety drivers" aren't going to get any better at preventing accidents in the future...

Research conducted by Missy Cummings, a Duke University professor who studies interaction between humans and unmanned vehicles, found that humans have trouble staying focused when expected to monitor an autonomous system.

Cummings studied 27 subjects in a four-hour-long driving simulation and found that, on average, their vigilance decreased after just under 21 minutes - a physiological phenomenon known as the "vigilance decrement." After this period, driver performance not only worsened, but accelerated in its deterioration.

"The bottom line is that humans are terrible babysitters of automation, which is why we are in such a dangerous period of time with good, but not great, autonomous cars," Cummings told Slate in an e-mail yesterday.

That means that investors who are considering investing in either Uber or Lyft once they go public might want to think otherwise - and wait, at least, until these dangerous kinks are fully worked out.

After all, the real money in automotive safety is tech, not "safety drivers."

Technology such as G-force gauges, GPS, and even driver-monitoring software all have concrete effects on the lives of drivers. And this tiny tech company has produced a device that implements all of that technology and more...

It's so beneficial, in fact, that the federal government is mandating select drivers to get one by the end of this month...

Forget Self-Driving Car Tech, and Opt for This Miraculous Device Instead

By March 31, an estimated 1 out of every 50 adults with a driver's license will need to secure one of these devices...

This mad dash will be made thanks to a federal mandate that goes into effect on April 1.

The mandate requires the nationwide deployment of a miraculous life-saving technology, with, as mentioned, the potential to unleash a $2 billion cash grab.

And only one small tech firm can fulfill this mad dash.

Get the details on a potentially millionaire-making opportunity here.

I AM already a member