EOS prices jumped another 1.5% this afternoon and pushed the cryptocurrency into the top six by market capitalization.

EOS has generated a lot of buzz since Tim Lea projected prices could hit $13 per coin by the end of the year. 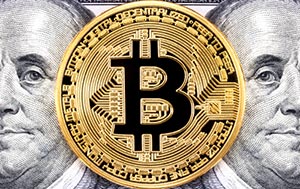 According to Finder.com, Lea is a fan of EOS because it could be the "hidden gem in the soft cryptocurrency market."

He also said that, as EOS technology improves, prices could climb higher.

In Bitcoin news today, the price was ticking back above $7,000 as cryptocurrencies attempt to rebound. Markets are reacting to news that the South Korean government plans to introduce a taxation framework by June.

Taxes on cryptocurrencies are expected to go into effect starting in 2019.

On Monday, the market capitalization of the global cryptocurrency sector slumped to $263.48 billion.

Bitcoin comprised 45.3% of the total cryptocurrency market, with a market cap of $119.37 billion.

The top performer in the space was Storj, which gained more than 34% in the last 24 hours.

If You're Not Making Millions of Dollars with Cryptocurrencies... You Could Be. Click here to discover the tiny coin that will soon be BIGGER THAN BITCOIN... and how to claim YOUR cryptocurrency fortune while you still can.

South Korea could soon jump into the crypto craze by creating its own coin...

The city of Seoul will establish the "S-Coin," a cryptocurrency designed for use in social benefits programs. The city's mayor made the announcement last week, but markets are just now starting to understand the point of the cryptocurrency.

The mayor says that they will use blockchain technology for the city's public transport systems.

The city is also establishing a fund to help advance blockchain startups in the region.

Ethereum Gets the April Fool's Treatment

Ether founder Vitalik Buterin tweeted that a hard cap on the supply of Ethereum tokens was "worth considering" over the weekend.

However, Buterin said his proposal was an April Fool's "meta joke."

Regardless, it fueled a debate among developers, and the idea of a hard cap on 120 million tokens is starting to gain traction.

During a visit on Bloomberg, Stiglitz defended the U.S. dollar and trashed the ongoing crypto craze.

"We have a good medium of exchange called the dollar... we can trade in that. Why do people want Bitcoin?" Stiglitz asked.

I hope you'll take advantage of all the great research on this breakout digital coin.

To find out how to get all this, just take a look...