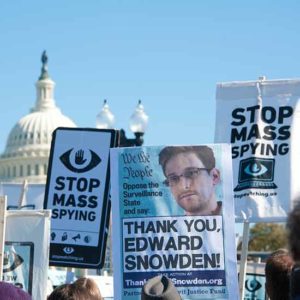 Edward Snowden, who is most famous for exposing the U.S. National Security Agency's (NSA) massive surveillance on U.S. citizens in 2013, believes Zcash is the most interesting cryptocurrency right now.

That's no surprise, since Zcash's focus is on privacy.

We'll show you exactly what Zcash does and why Snowden likes it so much, plus we'll show you a way to gain exposure to the blockchain technology without the risk of a cryptocurrency…

Zcash Co. does not sell, exchange, transmit, or retain custody of Zcash for consumers or the public at large. It launched the Zcash Foundation in March 2017 to guide the evolution of this privacy coin.

Snowden told cryptocurrency enthusiasts at a March conference in Germany that Bitcoin's ledger is not private enough, according to CoinDesk.com.

Snowden was in agreement with the audience that Bitcoin will have longevity in the market, but he doesn't adhere to the belief that "Bitcoin will last forever."

When asked by audience members if he feared blockchain and other emergent technologies would be used by dictators and corrupt entities, Snowden replied that he felt it was a question of "when," rather than "if."

But if cryptocurrency and blockchain systems are appealing enough, he believes they will be popular with global consumers.

As blockchain technology increases in use and receives mainstream adoption, owning the best blockchain stocks now will pay off for long-term shareholders.

And we have the perfect one to buy right now…

A Top Blockchain Stock to Purchase in 2018