Back in July 2013, Money Morning Defense and Tech Specialist Michael A. Robinson went on live television with a bold prediction for Bitcoin (BTC). 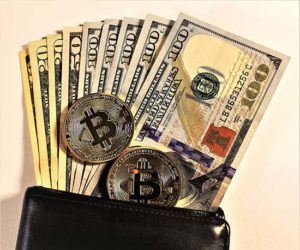 His first cryptocurrency summit in 2013 laid out simple strategies that could've netted phenomenal 25,351% gains at peak, turning a $10,000 investment into more than $2.5 million.

Unfortunately, not enough people were listening to him....

Instead, they were listening to the naysayers at CNN, which at the time put out an article saying that Bitcoin was "the perfect crime" and "one big scam."

But if you didn't listen to Michael back then, it's okay.

The "Peak Profit" Strategy to Know Before Bitcoin Potentially Reaches $100,000

With Bitcoin prices trading at $8,515.53 on April 20, Robinson had to make sure Money Morning readers don't miss out on this potential 1,074.32% profit opportunity.

"Even if you just plunk down $100 in Bitcoin right now, you'll be doing yourself and your family a huge favor," Robinson said on April 12.

Robinson, a Bitcoin guru with over 30 years of experience in tech investing, has a "peak profit" strategy that could give our readers an edge in cryptocurrency investing.

"When you set out to climb a mountain, you often can't even see the top from where you stand at the base. So you set your sights on the nearest peak, climb to it, and enjoy your new view. Out in front of you is a new higher peak, one that you couldn't see before. So when good and rested, you drop down into a valley and then climb to that next higher peak. And then again, you set your sight on an even higher peak, and continue upward...This is basically a valley-to-profit investing strategy, and it's driven by a key advantage that I have: superior Silicon Valley information about what's happening next in Bitcoin."

This isn't insider information or anything illegal.

But thanks to Robinson's network of connections, he can get more information than most people.

"I honestly believe this strategy could deliver a 15-fold explosion," Robinson said on April 12.

Now, make no mistake - these types of gains are rare...but we've seen it happen before, and the chance for everyday investors to strike it rich from cryptocurrencies is absolutely possible.

You don't want to miss this potentially huge opportunity...