Pyongyang's leader, Kim Jong Un, will meet with South Korean President Moon Jae In tomorrow (April 27), but there's one concession he hasn't yet made that leaves us doubtful about a future North-South Korea peace treaty.

The mainstream media, on the other hand, has already touted Friday's historical summit as a roaring success. 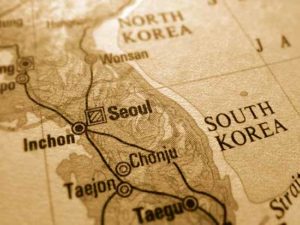 Tensions on the Korean Peninsula - the same tensions that have caused defense darlings like Boeing Co. (NYSE: BA) and Raytheon Co. (NYSE: RTN) to crush the Dow Jones' gains four times over in the past five years - aren't going anywhere any time soon.

In fact, this situation allows for a unique profit play that could more than double your returns from these already incredible stocks. Here's what you need to know...

It is true that Kim has made groundbreaking concessions of late that insinuate his willingness to negotiate with world powers.

On April 20, for example, he announced the suspension of nuclear and intercontinental missile tests on North Korea's part. Headlines around the globe heralded this declaration as a victory.

But the young dictator hasn't uttered the one key phrase Uncle Sam absolutely must hear to truly take him seriously.

Yes, that's the most important compromise he'll need to make to garner the trust, support, and cooperation of the rest of the world.

Tomorrow's North-South Korea meeting will set the tone for future relations on the Korean Peninsula and lay the groundwork for ongoing peace talks.

Kim will need to promise to denuclearize.

Failing to do so would render the summit nothing more than another instance of aspirational goals in jointly signed - but totally unenforceable - official statements.

We've seen that outcome before.

In 1994, for example, U.S. President Bill Clinton's administration signed a deal with North Korea known as the Agreed Framework. Under the terms, Pyongyang committed to freezing its illicit plutonium weapons program in exchange for U.S. construction of light-water nuclear reactors, heavy fuel, normalized relations, and formal assurances against the threat or use of nuclear weapons.

Then there was the historic 2000 North-South Korea summit, which resulted in a joint declaration that prompted then-President Kim Dae-jung of South Korea to famously declare: "There is no longer going to be any war. The North will no longer attempt unification by force, and at the same time we will not do any harm to the North."

We all know how that's turned out.

In 2002, the North once again began operating its nuclear facilities.

And on Feb. 10, 2005, North Korea announced it had manufactured nuclear weapons as a "nuclear deterrent for self-defense." A year later, in 2006, Pyongyang detonated its first-ever atomic bomb.

Now, U.S. analysts believe North Korea has multiple nuclear weapons. They estimate that "the North could have as many as 60 nuclear weapons, although this would be a high-end estimate," reported The Sydney Morning Herald in November 2017.

And independent experts believe the regime has "enough uranium to produce six new nuclear weapons a year," the outlet added.

So it's no surprise, then, that Pyongyang has agreed to cease future weapons testing - the country is well-stocked and ready for war. In fact, just over two months ago, Pyongyang's state media mouthpiece, Korean Central News Agency (KCNA), boasted the country's nuclear arsenal "is only aimed at the United States," reported Seoul-based Yonhap News on Feb. 24.

Kim Jong Un's concessions to anything less are nothing more than empty promises we've seen many times before.

Which means investors should hold onto their "weapons," too - those weapons being the defense plays we've long recommended.

Even if North Korea does agree to denuclearize, the de-nuking process will need to be monitored and verified by U.S. military experts, which could take years. It has been decades since U.S. troops actually stepped foot onto North Korean soil, so the United States will need all means of defense on hand should a melee erupt when we're there.

And if relations between the United States and North Korea devolve to where they were just six short months ago, then the United States will need the likes of Boeing and Lockheed Martin Corp. (NYSE: LMT) to maintain our missile defense systems and to upgrade our outdated Minutemen ICBMs cache, which we only just started retesting thanks, no less, to North Korea's ongoing threats.

Given recent market volatility, it's all but impossible to predict exactly how the defense sector will react to tomorrow's meeting, let alone when Kim and U.S. President Donald Trump meet in May. One of our favorite ways to prepare in a situation like this is Money Morning Defense and Tech Specialist Michael Robinson's unique variation of a "Cowboy Split."

In this play, instead of investing all of your available capital in your favorite defense stocks (any of the great firms mentioned above are excellent bets), you split your investment into thirds. You could use one-third to buy at the current price, set a lowball limit order to buy a second tranche at a 10% discount, and a third tranche at a 20% discount.

This automatically sets you up to buy more shares on significant dips and helps take the emotion out of trading during tense times.

For a complete guide on how you can protect yourself from financial devastation, read on...

If you're like most Americans, you've felt a sense of market turmoil ahead. We could be in for another white-knuckle ride... a "Great Reckoning," if you will.

So ask yourself right now: Are you where you want to be financially?

If the answer is no, then understand that you are not alone - and you need to click here now...