We're just three months away from one of the most historic moments the world will ever see: Marijuana in Canada will be completely legal by October.

We already know there's a market for marijuana up north.

We even know how big it is. 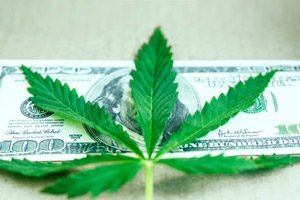 And Deloitte says it's going to be as high as $22.6 billion over the next couple of years.

The only problem was it was all illegal until June 19.

The money wasn't going to legitimate businesses. It was going to the black market.

The June 19 vote by Canadian officials to legalize all cannabis use was like flipping a light switch. Those billions of dollars are up for grabs.

Now, Canadian marijuana is going to be the fastest-growing industry on Earth for the next five years.

It's going to beat big pharmaceuticals.

It's even going to beat cryptocurrencies.

Let us tell you why.

And yet, the Canadian marijuana industry has the potential to grow much, much faster than that.

Experts predict the legal marijuana market could grow by nearly 9,000% in Canada alone – far faster than anything else on the planet.

But it's only the tip of the iceberg. Because global sales could bump that as high as 44,400% over the next few years alone if Canada captures the entire illegal marijuana market.

Just imagine what that kind of growth could do to your money...

This is an honest chance for regular, everyday people to become millionaires in the next few months...

This marijuana opportunity is in its infancy. It’s a shame that Doug has decided to give up on them, especially since truly great things are on the horizon.

Patience they say is a virtue. If one has some extra money to invest, l personally convinced that financial rewards are just around the corner.

Good luck to all and happy investing