While gold continues to struggle to find a catalyst, the price of silver made a notable move this week.

Although it was admittedly short-lived intraday action, silver prices shot up from $14.50 to touch $14.90 last Tuesday, a four-week high and a huge safe-haven bid as concerns about the euro permeated trading.

The move came as news emerged that Italy's anti-establishment government proposed a budget deficit target at 2.4%, above the EU's fiscal limits. Aggravating matters, one government official suggested Italy would do better with its own currency, rattling the euro in the dollar's favor.

While the silver price quickly settled, it has exhibited considerable technical strength since its mid-September low near $14.

Here's a closer look at the price of silver's movement this week...

Without a doubt, silver's real action came early in the week as investors flocked to the precious metal, along with gold and the dollar as safe havens. Monday (Oct. 1) was pretty lackluster as the U.S. Dollar Index (DXY) made a small gain and pushed silver back.

The Clock Is Ticking: Millions of American retirement plans hang in the balance - and if you're not doing this, you're in for a nasty shock in a few weeks. Click here now...

But Tuesday's action was impressive with silver soaring to $14.90 by 11 a.m. on dramatic safe-haven buying. The metal would settle back and average about $14.65 for the remainder of the week, but it managed to hold this new higher price plateau.

The DXY peaked on Wednesday, which helped push silver back as euro fears dissipated.

Here's the DXY action of the last five trading days: 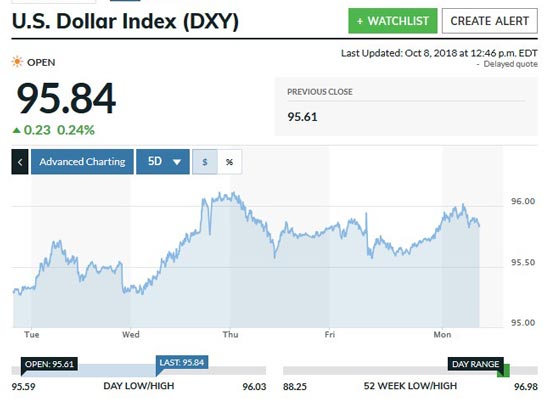 As the week wore on, silver prices fought to hold above $14.55 as the DXY dialed back but stayed solidly above 95.5.

Silver's trading action remained, however, pretty healthy as the metal averaged around $14.65, all the while creeping up toward its 50-day moving average around $14.75.

But on Monday (Oct. 8), as the Dow dropped another 180 points for a third straight day lower as higher yields spooked investors, the DXY jumped to 94.85 after testing 96. That stronger dollar pushed silver back to $14.30 by midday.

Now, here's my forecast for the price of silver going forward...