That's a major catalyst for an already growing industry as marijuana stocks are one of the most popular assets on the market this year.

In a recent report, Bloomberg showed marijuana stocks outperformed gold, Bitcoin, and the market as a whole this year. 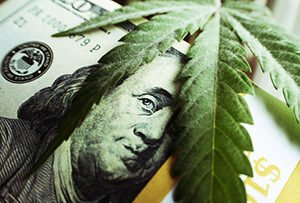 And marijuana penny stocks have even greater profit opportunity since these companies haven't hit the mainstream radar yet.

Plus, pot penny stocks give investors the chance to reap the benefits of this growing industry without spending too much money.

This investment strategy doesn't come without risk, however. It's important to remember that penny stock investors should never invest money they can't afford to lose.

But with the cannabis industry on the verge of spectacular profit, we want to show you three cannabis penny stocks with serious growth potential.

In fact, our top marijuana penny stock could jump over 300%...

Top Marijuana Stocks Under $5 to Watch, No. 3: GB Sciences Inc.

Over the last year, GB has announced plans to produce medicinal drugs that use compounds found in cannabis.

One central compound is CBD - a cannabis compound that has medical benefits but does not make users intoxicated.

GB received a government license to develop CBD products in February. The company also closed a deal with the Colorado Hemp Project that will give GB full access to the key ingredients necessary for CBD development.

In March, the company announced it would sponsor a symposium called "Innovation in Medical Cannabis Therapies." This symposium generated a significant amount of investor buzz over GB products and has put the company on the map.

Shares of GBLX currently trade for $0.52. However, with interest growing, GB could jump significantly as cannabis legalization sweeps North America.

But our next marijuana penny stock has even greater potential to gain and is trading for even less...

GreenGro intends to develop a line of CBD products that can be used in medical facilities, private medical practices, and artisan retailers.

Critical Update: You're Invited to the First-Ever National Event for Cannabis Investors on October 23rd - Click Here to Register for This Free Online Event

By investing in GreenGro, investors can get in on the ground floor of an industry with tremendous profit potential.

But GreenGro isn't the top pot stock on our list. This next company has even greater potential...

It's a pure "pick and shovel" play - a firm that serves the pot industry without having a direct hand in growing marijuana or operating dispensaries.

Here in the UK ???????? I’ve come to a standstill regarding finding a Stockbroker as none of them trade in OTC Stocks. So I have missed out on numerous Penny and pot stock opportunities. Perhaps you can send me and your UK Members a list of Traders and Brokers we can deal with so we can get on with investing opportunities here in the UK. Many Thanks, Leslie Salkow

Interactive Brokers registered in the Bahamas. They’ll let you trade every exchange and trade dealer network (Market Makers) in the world as long as you have a pulse, money to trade and can prove who you are.