Volatility is back, and it's wreaking havoc on stock indexes. The Dow Jones tumbled 600 points on Monday (Oct. 13) and is still trending down. Since the start of October, the VIX has surged to its highest levels since the beginning of the year.

But some stocks do very well when markets get volatile. And what we're going to talk about today is the best stock to buy and hold when markets start seesawing. 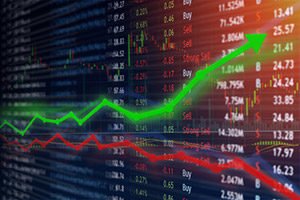 You see, the reason this is one of the best buy-and-hold stocks to buy is because its industry is in demand no matter what the markets are doing.

That might make it seem boring to some investors, but as Money Morning Special Situation Strategist Tim Melvin says, boring is no problem if it's going to make you a killing.

While Wall Street analysts are projecting up to a 40% surge in share price, we think it could be much more than that...

A Combination of Time-Tested Values and Cutting-Edge Tech

Charles Schwab Corp. (NYSE: SCHW) is one of the early innovators in retail discount trading, and it's simply one of the best stocks to buy and hold right now.

The company was founded in the 1970s to serve discount clients, and it continues to lead that category.

The founder was Charles Schwab, who operated with a simple philosophy: Provide quality service at the lowest prices around. You'll be rewarded with loyal customers, and their loyalty will pay off.

And his philosophy worked.

Schwab currently has a market capitalization of above $63 billion. It holds 11.3 million customer accounts, whose assets are worth about $3.6 trillion. In total, Schwab holds about 7% of the available investable assets in the United States.

Schwab is old-school in its principles. It offers asset allocation, personalized financial planning, and tax advice on top of the discount trading that gives the lowest trading costs available.

At the same time, though, it's very cutting-edge where it counts.

Recently, Bloomberg observed that Schwab was "a fintech firm long before the word 'fintech' was coined."

Charles Schwab was synonymous with the company when he headed it. But Walter W. Bettinger, II, has now been the CEO for about a decade. And it's a decade with successes equaling those of Schwab's tenure.

The firm's asset base has tripled since Bettinger became CEO. Plus, the client base has risen over 50%. It gets even better for the future of the company, too. Over 50% of new accounts in retail investing are opened by those under 40 years of age. That's a testimony to the company's innovation and shows it will have a reliable customer base well into the future.

Part of the reason for Schwab's success with millennials is its digital innovation. Schwab Intelligent Portfolios are driven by artificial intelligence (AI), which increases the efficiency of the well-balanced financial advice it offers.

But despite being an early adopter of digital innovation, it keeps a firm hold on its client base as humans.

Charles Schwab's adage has always been "We will survive if we do the right thing for people. We will collapse if we ever deviate from that mission." Schwab appears to be sticking by those words.

J.D. Power has rated Schwab the highest in achieving satisfied investors among all the U.S. full-service brokerage firms for two years in a row. Fortune put it on a list of most admired companies around the world in 2017. Investor's Business Daily rated it the top online broker for its customer service and reliability in trades.

Its reputation and quality service are why we think Schwab is a top stock even if times turn rocky.

But when you take a look at its financials, you'll see why it's such a great buy right now. It could even double your money. Here's how...

Why Schwab Is One of the Best Buy-and-Hold Stocks