It's game over for many brick-and-mortar retail companies. 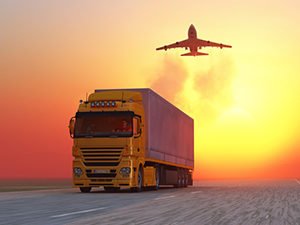 The "Retail Ice Age," caused in part by Amazon.com Inc. (NASDAQ: AMZN), has now spread to all corners of the industry. What began with the shuttering of bookstores and record shops quickly spread to retailers selling clothing, toys, electronics, and now even food.

It's clear by now that there's no such thing as an "Amazon-proof" retailer.

But there is one industry that's actually reaping the benefits of the Amazon effect: courier services. And we've got a few picks from that industry to give your portfolio a boost.

The Retail Industry Is Booming, and Courier Services Are Benefiting

The retail industry isn't shrinking so much as it's being displaced. The retail workers of yesterday are now working not just in Amazon's warehouses and customer service centers but also in delivery trucks and cargo planes.

So it's no surprise that major courier services and cargo airlines are generating record profits.

Statista projects e-commerce's share of total retail sales to hit 13.7% by 2021, up from 5.8% in 2013. As that share continues to increase, it will only mean greater fortunes for the companies that transport packages.

And as it happens, both of the big-name courier services have been given top scores by our Money Morning Stock VQScore™ system.

Before we look at each of those stocks, though, we should point out that Amazon has thrown a wrench in the works - as it always does.

That's because Jeff Bezos' company is in the process of building its own internal shipping operation, so it won't have to rely on third-party couriers in the future.

As we'll show you, that's not necessarily going to be the death knell for the big shippers as some people might expect. But it does present a huge opportunity for one company in particular other than Amazon itself.

As it happens, that company - which is already a direct beneficiary of Amazon's move into shipping - is yet another top-scoring stock in the VQScore system.

We'll tell you about that one after we look at these delivery companies...

The Big Courier Services Are Both on the Rise

Shares for both FedEx Corp. (NYSE: FDX) and United Parcel Service Inc. (NYSE: UPS) have slipped in recent months. But both have also started to bounce back. And there's good reason to expect big gains in the months and years to come.

In the case of FedEx, the drop was partly due to an earnings miss in late September. But earnings per share (EPS) was still up a hefty 37.8% from the same quarter last year. EPS has risen every year since 2013 and is up 145% in that time.

According to FactSet, that earnings growth is projected to continue through at least 2022, with more than 60% growth between now and then.

FedEx's sales have nearly doubled since 2010, and they've jumped 11.8% in the most recent quarter from the year before.

Analysts are extremely bullish on FedEx, too. Out of 23 analysts tracked by FactSet, 21 of them rate FedEx a "Buy" or "Overweight," with Thompson Davis & Co. calling for a 62% rise in share price.

And if we look at price/earnings-growth (PEG) ratio for the last 12 months, FDX shares come in at an 81% discount - suggesting major gains for investors who get in right now.

At first glance, many of the stats for UPS look good, but not as great as FedEx's. UPS's market cap is about 50% higher than FedEx's at $93 billion, though its sales figures for the last two years are nearly identical.

It's on pace for about 20% growth in EPS this year. And analysts give it an average rating of "Overweight." But the sentiment is not as overwhelmingly positive as it is for FDX.

UPS does have two significant advantages over FedEx, though.

First, it offers a dividend yield of 3.32%. That's almost three times as high as FedEx's yield, and 80% higher than the industry average.

FedEx has watched its cash flow turn sharply negative over the last few years. That's largely because this is a capital-intensive industry, and the company has invested in itself during that time. So a lot of the public concern over the issue may be an overreaction.

If it is something you're worried about, though, UPS has managed to keep itself in healthier shape in this regard. Case in point: FedEx's net change in cash over the last fiscal year was a loss of $1.1 billion, while UPS had had a net gain of $508 million.

You may prefer FedEx's capacity for explosive growth, or you may prefer UPS's safer balance sheet. But with the overall trends strongly favoring both companies, either one would be a great addition to your portfolio.

Up until recently, of course, these two companies had virtually no competition in their field. That has changed now that Amazon is building up its in-house shipping service.

In fact, this month Amazon upped the ante by offering steep discounts - sometimes setting prices as low as half of what UPS or FedEx advertise - in time for the holiday season.

This is a huge deal, but it's not as important for the big courier services as you might think.

That's because e-commerce is a lot bigger than Amazon. And UPS and FedEx are going to be the go-to couriers for retailers regardless of what Amazon does.

Currently, Amazon sales represent 7% of UPS's revenue and just 3% of FedEx's revenue. Those figures are significant, but not irreplaceable.

Consider that e-commerce around the world has grown from $1.3 trillion in 2014 to an estimated $2.5 trillion in 2018, according to Invesp. That's nearly 90% industry growth in five years, which should continue to keep the big couriers busy.

Also consider both big couriers have a global presence. As e-commerce continues to grow, you're going to see a lot of it coming from global competitors to Amazon, such as Alibaba Group Holding Ltd. (NYSE: BABA), that are more interested in keeping their operations lean and outsourcing most of the logistics.

In other words, whether Amazon does its own shipping or not, FedEx and UPS are going to be just fine.

But there is one company that has a lot to gain from Amazon's move. That's a small company that the online retail giant has already turned to in order to build its own cargo fleet.

With just a $1.4 billion market cap, this company's contracts with Amazon - both now and in the future - are going to generate big profits for its shareholders.

That makes this your No. 1 pick-and-shovel play on the e-commerce industry.

As Amazon Builds Its Delivery Fleet, This Company Is Reaping the Rewards