Last week might've been a short trading week, but it was packed with the sort of financial news that sends the price of gold higher.

This latest gold rally pushed the metal to a fresh five-month high and close to a new breakout level.

Of course, the G-20 summit in Buenos Aires provided an early boost for gold prices, as the United States and China agreed to a 90-day truce with no new tariffs, as they work toward resolving their trade disputes. 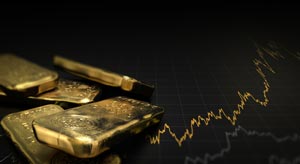 But stress in bond markets along with news of the arrest of Chinese tech giant Huawei's CFO would turn sentiment around, crushing stocks and sending shelter seekers into gold.

The selling in general equities would accelerate later in the week, as investors became increasingly concerned the U.S. economy may be slowing, which could cause the Fed to turn dovish sooner than originally expected.

All that combined to pressure the dollar, helping to lift the price of gold in the process.

Let's take a look at how the week unfolded and where I see the gold price heading next...

Negative News Was Good for the Price of Gold

Gold began last week's Monday (Dec. 3) trading day with impressive force, driven by mostly by the positive trade news on U.S. - China relations.  That was enough to push gold to $1,234 by late morning, just shy of the $1,236 high the metal enjoyed at the start of November.

Then the equity sell-off would peak...

Gold would then power higher still on Tuesday (Dec. 4) as stocks sold off further.  The "high" they had enjoyed on Monday's news dissipated as the five-year T-Note yield dropped below the two-year note yield. That provided an ominous "yield inversion" warning, heightening concerns about a slowing U.S. economy.

You can see how traders reacted in the chart of the U.S. Dollar Index (DXY) below... 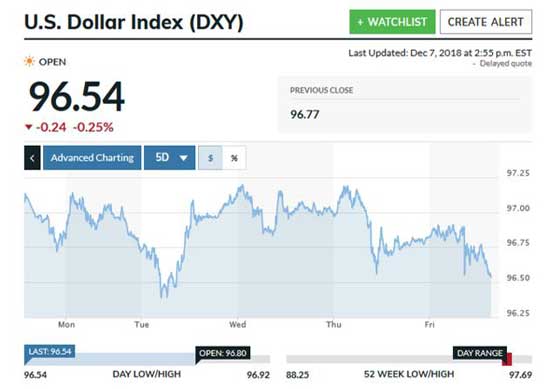 Midweek's stock market holiday, due to the funeral of former U.S. President George H.W. Bush, saw dollar index consolidation around the 97 level, while gold did essentially the same, hovering around $1,237.

Thursday's (Dec. 8) action was characterized by an even lower open than Tuesday's close, with stocks fighting to move higher but losing, except for the tech-heavy Nasdaq, which eked out a tiny gain. Fears did manage to dissipate slightly.

Here's how that action looked:

But as the trading week ended, stocks opened in the green but quickly turned red and kept heading south. The DXY joined in the action, approaching 96.5 by the end of the trading day.  This combination did wonders to lift gold, which spent the day climbing, reaching ever closer to $1,250.

Now that gold prices are starting to rally, my latest gold price prediction is looking even better...